Retail positioning is too crowded on the long side, sell on rallies: Martin Roberge

Target Corp. plunged the most since 1987’s Black Monday crash after becoming the second big retailer in two days to trim its profit forecast.

A surge in costs during the first quarter shows little sign of easing, Chief Executive Officer Brian Cornell said. Operating profit will amount to only about 6 per cent of sales this year, 2 percentage points below the previous forecast, Target said Wednesday. And the company’s first-quarter adjusted profit missed the lowest of 23 analyst estimates compiled by Bloomberg.

“We were less profitable than we expected to be, or intend to be over time,” Cornell said in a briefing. “Looking ahead, it’s clear that many of these cost pressures will persist in the near term.”

Target’s worsening outlook echoes the darker panorama at Walmart Inc., which cut its profit forecast on Tuesday and also posted its biggest stock decline since 1987. Target’s fuel and freight costs soared in the first quarter while a shift in consumer spending caused a sharper-than-expected slowdown in apparel and home-goods sales, prompting the company to mark down bloated inventories. 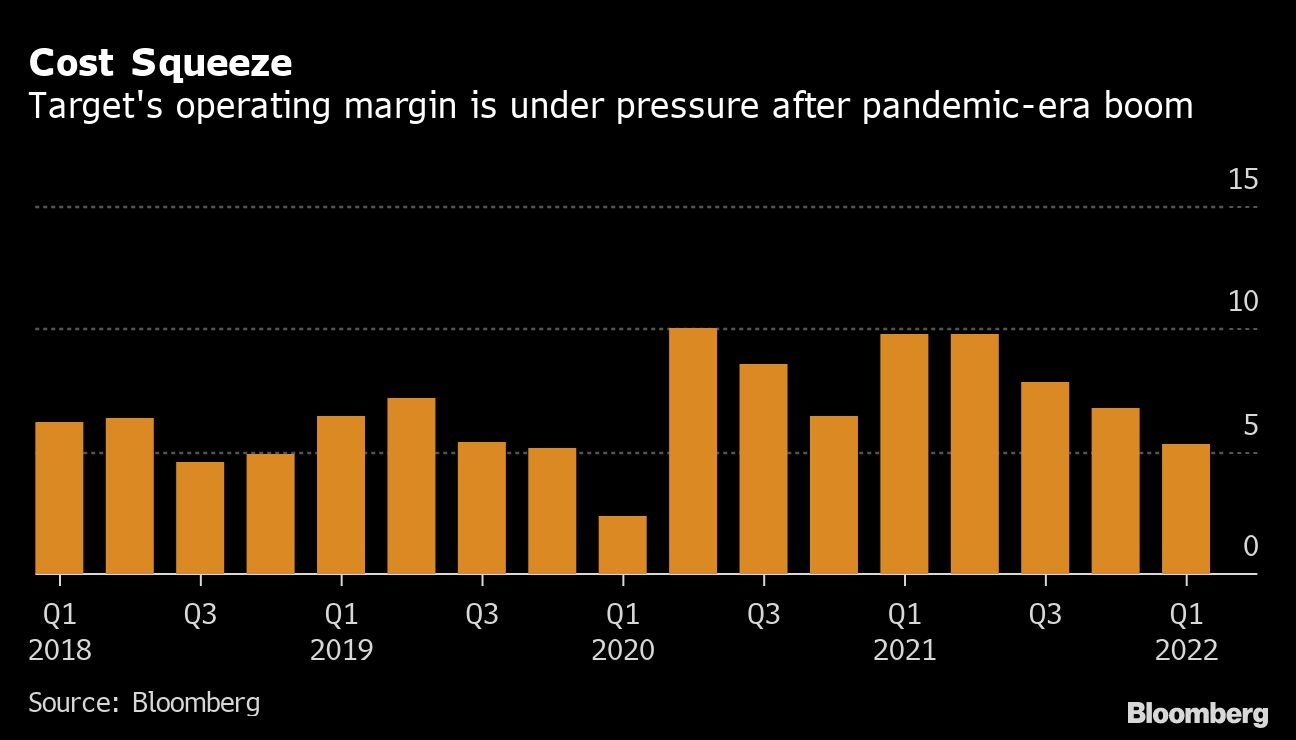 “For the last two years, these guys have done nothing but blow out expectations,” said Brian Yarbrough, a retail analyst at Edward Jones. “In one quarter, that’s all wiped away. Now it’s a ‘show-me’ story.”

Target sank 25 per cent to US$161.61 at the close in New York, the worst plunge since Oct. 19, 1987, an infamous market collapse known as Black Monday. The shares had fallen 7 per cent this year before the results, outperforming a 26 per cent drop in an S&P 500 index of consumer-discretionary stocks.

Target is now trading at its lowest level since late 2020, giving back much of its pandemic-era gains. The share plunge dragged down other retailers as well and provided fuel for the biggest market rout in almost two years. Costco Wholesale Corp., Dollar General Corp. and Dollar Tree Inc., which are preparing to report results next week, all posted double-digit declines.

Investors received another dose of bad news after the close when Bath & Body Works Inc. slashed its profit outlook. The company cited inflation as well as a decision to boost investment in information technology and its customer loyalty program. The shares slumped 4.5 per cent in after-hours trading at 4:43 p.m. in New York.

The retailers’ results reinforced how profitability is starting to erode across the industry.

“The Target margin shortfall is more dramatic than what Walmart posted on Tuesday and clearly there are some industrywide/macro problems occurring,” Adam Crisafulli, an analyst at Vital Knowledge, said in a report. “Food/gas inflation are drawing dollars away from discretionary/general merchandise, forcing aggressive discounting to clear out product.”

On a conference call to discuss earnings, Barclays Plc analyst Karen Short questioned why Target was cutting its outlook so soon after an upbeat investor meeting in early March. Cornell said the company “did not anticipate the rapid change in conditions” that has occurred since then.

Adjusted earnings tumbled to US$2.19 a share during the three months ending in late April, the Minneapolis-based retailer said in a statement. Analysts had been expecting US$3.06 on average.

Like Walmart, Target reported robust sales as US consumers powered ahead despite the highest inflation in four decades. Target’s comparable sales climbed 3.3 per cent in the first quarter, almost three times the average of analyst estimates compiled by Bloomberg. Revenue rose 4 per cent to US$25.2 billion. Wall Street had expected US$24.3 billion.

But strong demand for food and beverages, beauty products and household essentials went along with “lower-than-expected sales in discretionary categories,” Target said. That’s a sign that shoppers are pulling back as they struggle to buy basic goods. Cornell said customers are buying more of Target’s store brands, a common strategy for shoppers seeking bargains.

The CEO also cited a “dramatic change in sales mix” as the COVID-19 pandemic abates. Customers who bought television sets or kitchen appliances last year might be purchasing restaurant gift cards or luggage for upcoming trips this year, he said.

The value of Target’s inventory surged 8.5 per cent from the previous quarter and 43 per cent from a year earlier. Retailers generally try to avoid piling up inventory because it can incur costs. Indeed, inventory impairments were one of the causes of the company’s lower-than-expected profitability. Chief Financial Officer Michael Fiddelke said additional markdowns are likely in the current quarter.

“Unexpectedly high costs” are another challenge, Target said. During the current quarter, operating margins will be similar to the first-quarter result of 5.3 per cent, according to the Minneapolis-based company. Analysts had been expecting 9.5 per cent.

Cornell and Chief Financial Officer Michael Fiddelke reiterated their confidence in Target’s long-term ability to earn operating margins of 8 per cent even as they abandoned that goal for this year. Fiddelke said the company has been raising some prices, although it’s also trying to avoid turning off customers with big increases.

“We have seen prices rise, but it is the last lever we pull,” he said. “You’ll see us continue to use all the levers.”