Target Corp. is betting heavily on a dramatic financial comeback the rest of this year after badly trailing its own forecast as well as Wall Street’s estimates in the second quarter.

The retailer stuck with its outlook for operating income of about 6 per cent of sales during its fiscal second half after taking a painful hit from aggressive moves to reduce inventory. During the three months ending in late July, the operating margin slumped to 1.2 per cent, lower than the 2 per cent forecast Target issued in June when it slashed its profit outlook.

The earnings plunge -- an unflattering contrast to Walmart Inc.’s upbeat results this week -- reflected Target’s moves to slash inventories of discretionary items and pivot to essentials as soaring US inflation forces shoppers to pay more for groceries. Target executives argued that their efforts to pare bloated stockpiles of kitchen appliances, patio furniture and other durable goods basically worked, despite the hit to profits. 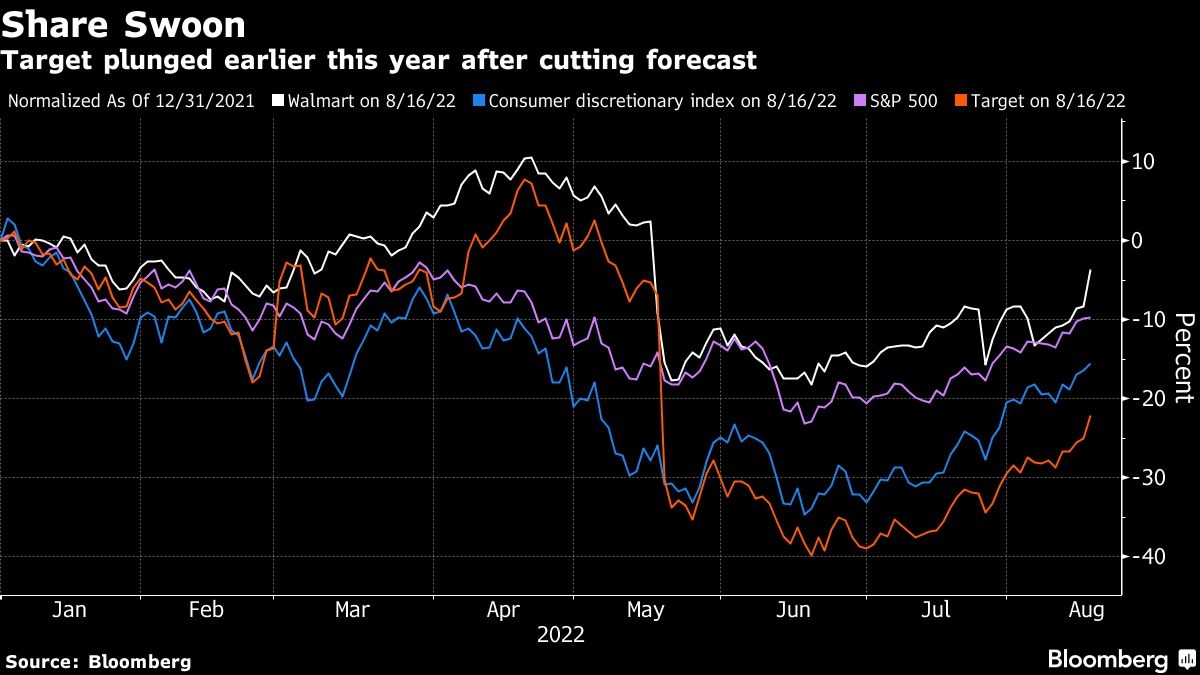 “The vast majority of the financial impact of these inventory actions is now behind us,” Chief Executive Officer Brian Cornell said on a conference call with analysts Wednesday. “We’re positioned to deliver a strong improvement in our profitability this fall.”

“It’s clear the cost to clear excess product was even higher than management anticipated, and there is still plenty of work to do,” Edward Kelly, an analyst at Wells Fargo & Co., said in a report. “Near-term uncertainty remains, but we saw nothing to change our positive view around the 2023 recovery story.”

Still, Target’s decision to stand by its operating-margin forecast for the second half “leaves the door open for more disappointments,” said Paul Lejuez, an analyst at Citigroup Inc.

Target, which gets more of its revenue from discretionary items than Walmart, has been bulking up on basic products while marking down home goods. The company reported strong second-quarter demand for food and beverages, household essentials and beauty products.

Indeed, while the mix of sales is changing to favor basic goods, consumers are still spending. During the fiscal second quarter, total revenue climbed 3.5 per cent to US$26 billion, Target said in a statement. That topped analysts’ estimate of US$25.8 billion. Comparable sales rose 2.6 per cent, driven by a 2.7 per cent increase in traffic, while the average transaction amount was flat.

“We continue to see a very healthy US consumer,” Cornell said.

US retail-sales data for July backed that up Wednesday morning, with gains in categories other than autos and gasoline suggesting continued consumer resilience.

But for Target, markdowns hammered the bottom line, and the company also took a hit from freight costs. Adjusted earnings in the fiscal second quarter tumbled 89 per cent to 39 cents a share, trailing the lowest analyst estimate compiled by Bloomberg. On average, Wall Street had expected 72 cents.

Target’s latest miss follows a string of cuts to the company’s profit forecast.

In March, the Minneapolis-based retailer said operating income would amount of 8 per cent of sales this year. In May, the company lowered that to 6 per cent. In early June, it said it would attain the 6 per cent goal only in the second half -- the same line in the sand it maintained in its latest earnings statement.

In the second quarter, inventory jumped 36 per cent from the same period a year earlier. That was slightly lower than the 43 per cent surge in the first quarter.

“The inventory reset in 2Q pushed down the operating margin more than expected and forced the profit miss, but the move should position the retailer for a stronger 2H. Reiterating full-year guidance gives us confidence that the worst of the inventory issues may be in the past.”

Partly fueling the recent increase was a decision to stock up on merchandise earlier than usual after the supply-chain disruptions of recent years, Target said. Still, the physical space occupied by inventory in distribution centers has fallen 20 per cent since June and cost pressures are easing with the recent decline in oil prices, Chief Operating Officer John Mulligan told analysts.

In addition, the mix of products in the inventory has been shifting toward essential goods with a low risk of markdowns. While more in line with demand, that’s a potential headwind for earnings later this year since groceries typically generate narrow profit margins for retailers.

“The company reduced its inventory exposure in discretionary categories while investing in rapidly growing frequency categories,” Target said in the statement.