Third-quarter comparable sales, a key retail metric, rose 4.5 per cent, a full percentage point above what analysts polled by Consensus Metrix had projected. Profit this year excluding some items will be between $6.25 and US$6.45 a share, Target said Wednesday.

The shares rose as much as 10 per cent to $122.44, their highest intraday level. The stock, the best performer in the S&P 500 Index Wednesday, had already soared 68 per cent this year through Tuesday.

The blowout performance distanced the U.S. cheap-chic retailer from struggling rivals like Kohl’s Corp., which on Tuesday cut its full-year profit forecast for the second time this year on sales that trailed projections. Even Walmart Inc. stumbled this quarter due to weakness at its Sam’s Club warehouse division. In contrast, Target has been able to set itself apart by opening smaller locations in urban areas, introducing a steady stream of new store brands and expanding the number of ways customers can get their orders.

“From top to bottom, this is a strong report,” Brian Yarbrough, an analyst at Edward Jones & Co., said. “They are really back at the top of their game and taking market share from a lot of the weaker players.”

Weak apparel sales had hurt Kohl’s and Walmart in the quarter, but Target didn’t suffer the same fate, with apparel and accessories delivering growth of more than 10 per cent, the company said.

Target’s investments in e-commerce, such as the rollout of curbside pickup and same-day deliveries, have boosted sales, kept Amazon.com Inc. at bay and also attracted new customers who didn’t previously shop there. Online sales rose 31 per cent in the quarter, but more important, e-commerce didn’t weigh on profitability as it had in previous periods. Gross margin compared with a year earlier expanded for the second straight quarter, which is something analysts had their eye on.

Besides better-than-expected apparel, jewelry and shoe sales, margins improved as 80% of the digital sales growth came from more economical fulfillment options, like in-store pickup, executives said on a call after the earnings release. That saves them money compared with delivering to homes. 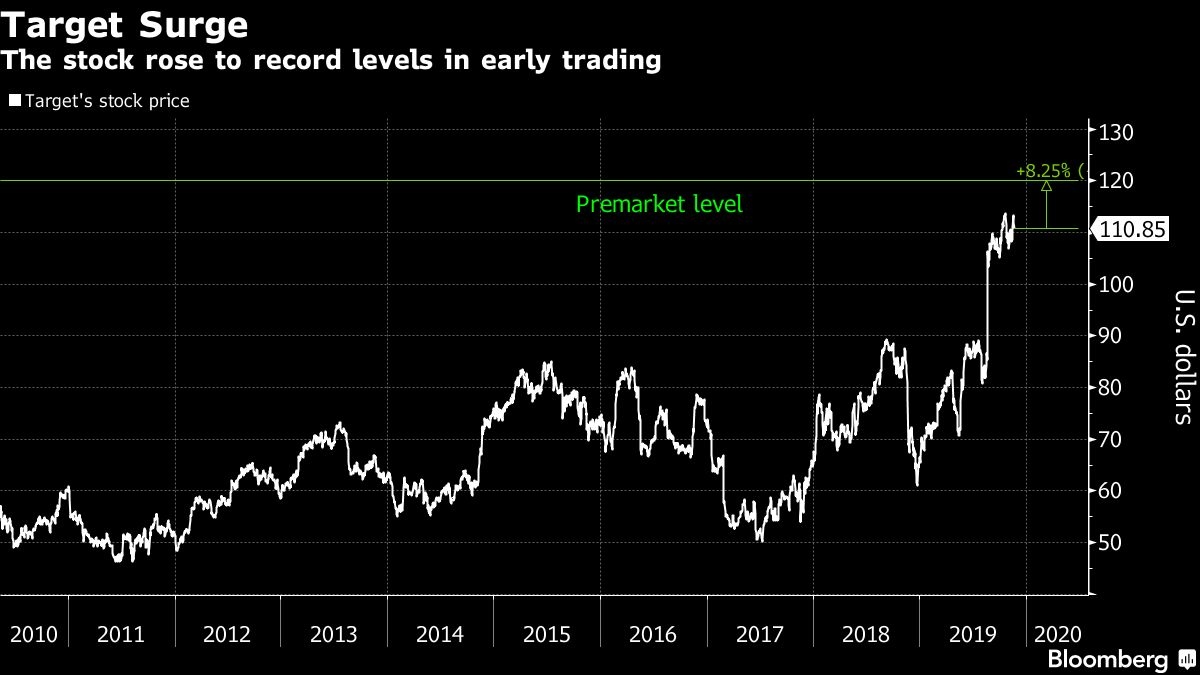 The company has made a big bet on toys this holiday season by opening more than two dozen mini-Disney stores inside some of its locations and fulfilling sales made on the relaunched Toys “R” Us website. Target has a high bar to clear, though: Last year’s holiday sales rose 5.7 per cent, so it has brought in 10,000 new and exclusive toys to entice shoppers, and has boosted its holiday payroll by $50 million.

This holiday season could be lackluster one for retailers, according to Bloomberg Economics, with sales projected to grow just 3.4 per cent, below the projections from the National Retail Federation. Last year, Target and others benefited from the demise of Toys “R” Us, which created opportunities to grab sales in categories like toys and baby products. This year, it won’t be as easy, especially as the selling season is compressed, with six fewer days between Thanksgiving and Christmas compared with 2018.