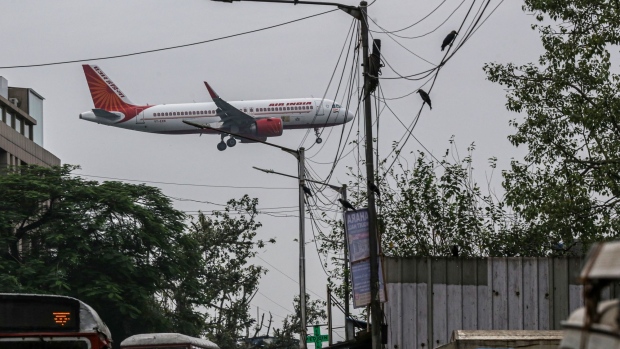 An Air India Ltd. aircraft prepares to land at Chhatrapati Shivaji Maharaj International Airport in Mumbai, India, on Tuesday, Sept. 28, 2021. The India government is attempting to sell state-run Air India after two failed attempts. Despite the mounting debt and losses, the airline has some lucrative assets, including valued slots at London's Heathrow airport, a fleet of more than 100 planes and thousands of trained pilots and crew. Photographer: Dhiraj Singh/Bloomberg , Bloomberg

(Bloomberg) -- Tata Group-owned Air India Ltd. is close to signing a deal with Boeing Co. to buy up to 150 737 Max planes, marking the first major aircraft order after the carrier’s privatization, the Economic Times reported, citing people it did not identify.

Air India is likely to place a firm order for 50 737 Max jets with an option to acquire as many as 150, the newspaper reported. Tata formally took charge of debt-laden Air India earlier this year.

A Boeing spokesperson declined to comment to Economic Times. Air India did not immediately respond to a request for comment outside office hours.

The plans to add more fuel-efficient planes may help the airline to increase its domestic and international market share. Tata’s recent decision to merge Air India with Vistara, which it jointly holds with Singapore Airlines Ltd., is expected to create a behemoth in one of the world’s fastest-growing aviation markets.

The integration is set to make Air India the country’s largest international and second-largest local carrier with a fleet of 218 aircraft.

The deal will give Singapore Air a 25.1% stake in the merged carrier for an investment of $250 million. Both the partners have agreed to inject fresh capital if needed in the coming two years in the enlarged Air India, with Singapore Air’s share potentially as much as $615 million.