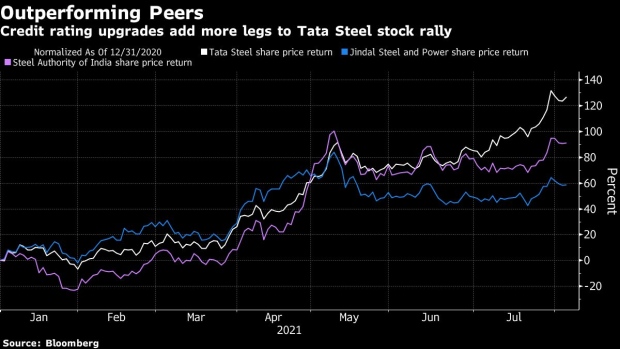 A pedestrian walks past a Tata Steel Ltd. plant in Jamshedpur, Jharkhand, India, on Monday, Feb. 11, 2019. Tata Steel is shifting its focus to India, where a government-led thrust on infrastructure is supporting demand. Plans are underway to double capacity in five years through expansions at existing mills and acquiring indebted domestic mills. , Bloomberg

(Bloomberg) -- A second ratings upgrade for Tata Steel Ltd. this year has sparked a rally in the Indian steelmaker’s stock that’s outpacing its peers.

The company’s shares surged as much as 2.9% Wednesday, beating a 1.2% gain for the broader Sensex index, after S&P Global Ratings raised Tata Steel to BB from BB- on Tuesday, following an upgrade in April. Its dollar bond due 2028, one of India’s best performing notes, gained 0.3 cent on the dollar.

Tata Steel’s shares have climbed 122% this year, while rivals Jindal Steel & Power Ltd. and Steel Authority of India are up 58% and 89% respectively.

The company is gaining from a commodities boom and using the greatest steel rally in a generation to cut its borrowings. Tata Steel’s debt is expected to decline by more than 30% to 600 billion rupees ($8.1 billion) by March 2023 from its March 2021 level, exceeding the company’s goal of reducing debt by at least $1 billion per year, according to S&P Global.

“The stable outlook reflects our expectation that Tata Steel will continue deleveraging to improve its resilience to downturns,” S&P Global said in a statement.