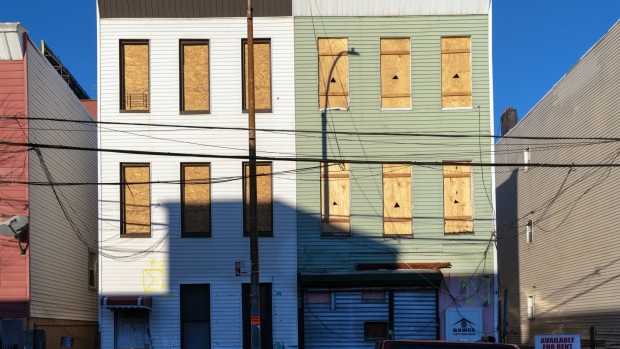 Boarded up residential buildings stand in the Port Morris neighborhood of the Bronx borough of New York, U.S., on Friday, Jan. 11, 2019. For a limited time, investors who develop real estate or fund businesses in opportunity zones are able to defer capital gains on profits earned elsewhere and completely eliminate them on new investments in 8,700 low-income census tracts. The goal is to reinvigorate these areas. , Bloomberg

(Bloomberg) -- The 2017 Republican tax overhaul in the U.S. could provide relief for billionaire art collectors stung by the expiration of another major tax break.

Art collectors may have a “once-in-a-generation opportunity” to invest capital gains in economically depressed areas around the country, according to Cresset Partners, an adviser to wealthy families. The government has designated more than 8,000 areas as “qualified opportunity zones” and is offering tax breaks on investments held there.

The U.S. art market, the world’s largest, has been disrupted since 2018 by the end of 1031 "like-kind" exchanges, a legal provision that allowed investors to roll capital gains from art sales into new purchases. It had previously boosted prices and trading by allowing investors to defer taxes on capital gains as long as they kept buying and selling paintings, sculptures and other collectibles.

After the Tax Cuts and Jobs Act of 2017 limited the 1031 tax break to real estate, the art industry lost velocity and investors have been seeking alternatives to lower their tax burden.

Opportunity zones might do just that, according to Nick Parrish, managing director of Chicago-based Cresset.

“It’s a really interesting and flexible tool, which allows a collector to peel off the gain and invest into other businesses,” he said. “With all the capital gains on the American balance sheet, it could be one of the largest tax-incentive programs in U.S. history.”

Rolling their capital gains into an opportunity-zone fund would allow art investors to defer paying taxes and reduce them by as much as 15%, if held for more than seven years. The investment wouldn’t be taxed on future capital gains if held for 10 years.

Cresset has raised $280 million for a fund, Parrish said. The fund is developing seven real estate projects in seven cities, including Nashville, Portland and Denver. Cresset’s fund wasn’t created specifically for art investors, but some clients collect art and so it’s planning to pitch the services to individuals, galleries and auction houses, Parrish said.

For now, Parrish said he isn’t aware of any collectors putting money from art sales into opportunity zones. In order to qualify for the tax breaks, the funds need to invest in operating businesses or real estate. Potentially, this could be a gallery or storage facility, he said, adding that certain targets have to be met on employment and revenue of the projects.

"I hear a lot of chatter about it,” said art lawyer Thomas Danziger. “It’s a tax advantage, but it doesn’t create velocity of trading like 1031s.”

--With assistance from Noah Buhayar.

To contact the reporter on this story: Katya Kazakina in New York at kkazakina@bloomberg.net