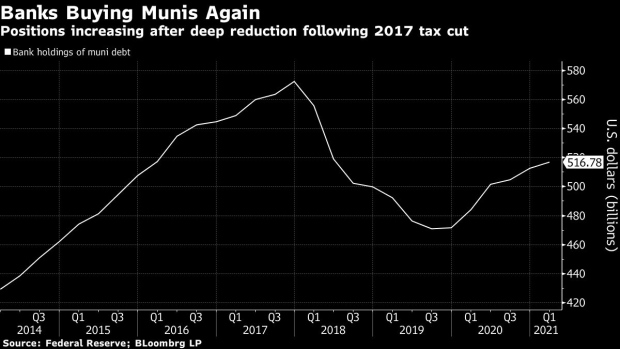 (Bloomberg) -- The Democrats’ push to raise the corporate income tax will likely drive banks and insurers to step up their purchases of municipal bonds, a haven for tax-averse investors.

That could spark demand for state and local government debt from financial firms seeking to ease their tax burden. Banks, property and casualty insurers and life insurance providers are active investors in the $4 trillion municipal-bond market, collectively holding a combined $1 trillion of the securities as of March 31, according to Federal Reserve data.

“With the increase in the tax rate you would see more demand for tax exempts from banks and property and casualty insurance, especially because they’re quite sensitive to tax-rate changes and often times they make decisions between municipal bonds and corporate bonds,” said Karel Citroen, head of municipal research at Conning, which oversees $9 billion of state and local debt, mostly for insurance clients.

The tax increase would partially roll back the deep cuts in the 2017 law enacted under former President Donald Trump, which reduced the corporate rate from 35%. That caused banks to slash their holdings of municipal bonds by lessening the need for the tax shelter.

Such holdings by financial institutions and insurers are down from $1.1 trillion at the end of 2017, the Fed’s data show.

The latest tax-law changes could also affect demand from the wealthiest investors. The steps approved by the House Ways and Means Committee would raise the highest tax rate and impose a 3% surtax on incomes over $5 million.

The impacts appears largely priced into the market, given that yields have been largely unchanged since the measures were rolled out. Investors have widely anticipated such tax hikes under Biden, contributing to a large influx into tax-exempt bond funds.

“If the tax changes are implemented in the current form, we will likely see demand for the product remaining quite strong,” Barclays strategists wrote in a report Wednesday. “Higher individual tax rates, and a 3% surcharge for adjusted gross income above $5 million, should increase appetite even further, given that individual investors in top tax brackets own the bulk of tax-exempt bonds.”