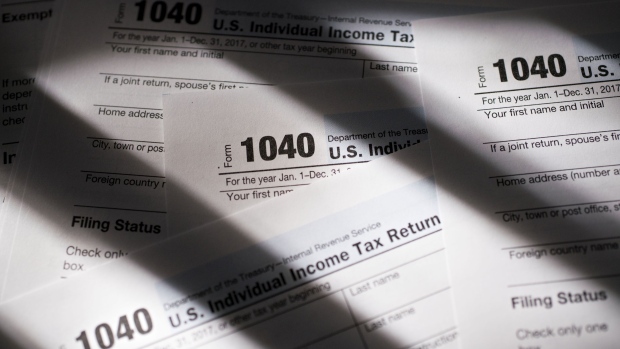 U.S. Department of the Treasury Internal Revenue Service (IRS) 1040 Individual Income Tax forms for the 2017 tax year are arranged for a photograph in Tiskilwa, Illinois, U.S., on Monday, March 19, 2018. The IRS urged taxpayers to use the Service's online tools to view the status of their federal tax account, information such as: the amount they owe or paying their tax liabilities online. Photographer: Daniel Acker/Bloomberg , Bloomberg

(Bloomberg) -- The number of tax refunds issued so far this tax season is down almost 5% compared to last year, an indication that many Americans didn’t withhold enough from their paychecks and could face bills from the IRS.

The IRS issued more than 10.8 million tax refunds through the week ending in Feb. 7, according to statistics published Thursday. The agency had issued nearly 11.4 million at the same point in the tax filing season last year.

The statistics show that the number of tax returns submitted and processed are roughly in line with last year, down only 0.4%, according to the IRS’s figures. The amount of the average refund, at $1,952, is up $3.

The decline in the number of refund checks was a sore point during last spring’s tax filing -- the first after President Donald Trump’s $1.5 trillion tax cut went into effect -- as many taxpayers expected to see benefits from the law that cut income tax rates, boosted the child tax credit and increased the standard deduction.

The number of refunds and the average check size at the beginning of the 2019 tax season were significantly lower than the previous year, but the gap narrowed as more people filed. At the end of the year, the IRS reported it issued about 343,000 fewer refunds than the year prior.

More than 80% of filers received a tax cut under the new law, but changes in withholding rates meant that many got the tax cut in small chunks in their paychecks throughout the year, rather than in one large payment after filing their tax return.

The IRS has created a withholding calculator to help taxpayers determine how much they should withhold to get the refund they want. The agency also released an updated W-4 form in January for employees to direct how much their employers should take out of their paychecks. Workers starting new jobs will automatically fill out the new form, but any employee can update their withholding on the new form even if they aren’t changing jobs.

Another factor could be contributing to the lower number of refunds: intentional delays. The IRS holds all payments that contain some refundable tax credits, such as the earned income tax credit, until mid-February to screen them for fraud.

The IRS is encouraging taxpayers to use the agency’s website to get answers to questions and file electronically to receive their refunds more quickly, especially as more people file their taxes over the President’s Day weekend.

“Filing electronically reduces tax return errors as the tax software does the calculations, flags common errors and prompts taxpayers for missing information,” the IRS said in a statement Thursday.

To contact the editors responsible for this story: Joe Sobczyk at jsobczyk@bloomberg.net, Anna Edgerton