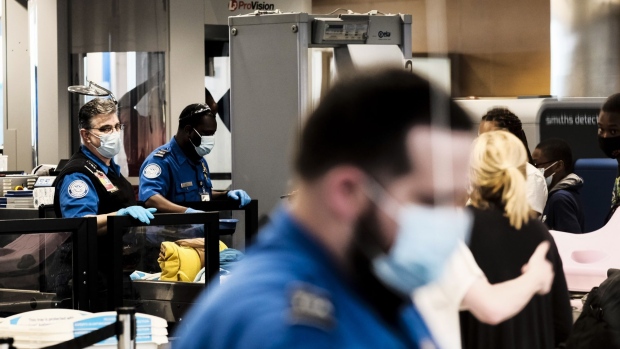 Residents stand in a line to receive Covid-19 PCR tests at a testing site run by the Centers for Disease Control (CDC), Federal Emergency Management Agency (FEMA) and eTrueNorth in Washington, D.C., U.S., on Wednesday, Jan. 5, 2022. The U.S. recorded over a million coronavirus cases on Monday, nearly doubling the previous records with hospitalizations increasing fueled by the virus rapidly spreading among the unvaccinated. , Bloomberg

(Bloomberg) -- Passengers at the Phoenix airport had to be funneled into consolidated checkpoints because so many security agents called in sick. In a San Jose, California, courtroom, a federal judge postponed the highly anticipated fraud trial of Theranos Inc.’s former president because jurors can’t be brought in to fill out questionnaires.

And at supermarkets from coast to coast consumers could soon be paying even more for ground beef as meat-packing plants and slaughterhouses have slowed production because of a lack of government inspectors.

Across the country, the coronavirus surge that is claiming record numbers of victims is disrupting a federal civilian workforce of 2 million. That has delayed the processing of tax returns, drug approvals and even foreign travel by diplomats as workers call in sick, quarantine or stay home to care for ill family members.

“Communities and transportation systems have been hard hit by increasing Covid infections, and we continue to encourage those who are ill to stay home,” R. Carter Langston, a spokesman for the Transportation Security Administration, said in an email. “The safety of our employees and the traveling public remains our top priority.”

The TSA, which staffs security checkpoints at airports and other transportation hubs, has more than 3,500 employees with active Covid infections. More than 18,000 of the agency’s 65,000 employees have tested positive for the illness, according to the agency.

The shortage of agents forced the shutdown of two checkpoints at the busiest terminal of Phoenix’s Sky Harbor International Airport last week. The checkpoint “consolidations” at the airport are continuing and additional airports may be affected by worker shortages in the future, said agency said Thursday.

A Biden administration official, who was granted anonymity to discuss the government’s response, said individual agencies are updating their protocols to reflect the latest guidance from the Centers for Disease Control and Prevention.

A shortage of Agriculture Department inspectors at slaughterhouses and packing facilities at plants in Wisconsin, Nebraska and Texas is slowing production and raising prices, said Paula Schelling-Soldner, chair of the joint council of food inspectors at the American Federation of Government Employees.

“The impact is going to be if there is not enough inspectors and the plant employees are also missing, there is going to be a short supply of meat and poultry throughout the entire country,” Soldner said. “Just like there was at the beginning of the pandemic.”

The USDA Food Safety and Inspection Service said in a statement that there have been no “widespread production slow-downs or closures” caused by inspector absences. The agency is monitoring the situation and requires employees to wear masks when federal inspectors are present, according to the statement.

The Federal Aviation Administration said traffic volumes at some airports could be reduced and flights delayed during busy periods because so many air traffic controllers have tested positive for the coronavirus, though there have been no widespread disruptions so far.

“As we have done from the start of the pandemic, we continue to work with the FAA on protecting the health and safety of our frontline safety professionals,” Doug Church, deputy director of public affairs for the National Air Traffic Controllers Association, said in an email.

The Food and Drug Administration announced earlier this month it was postponing much of its inspection work “to ensure the safety of its employees and those of the firms it regulates as the agency further adapts to the evolving Covid-19 pandemic and the spread of the omicron variant.”

The move to shut down in-person inspections of facilities could delay the approval of pharmaceuticals and medical equipment, said Kalah Auchincloss, a former senior FDA official, who now serves as executive vice president for Greenleaf Health, a Washington-based consultancy that counts major drug makers and device manufacturers as clients.

“Their level of concern has been very heightened,” Auchincloss said. “The longer it drags on the more their concern will be.”

A previous pause in the agency’s inspection activities in 2020 led to nearly 70 missed approval dates, including ones for drugs from companies such as Bristol-Myers Squibb Co. and Novartis AG, Auchincloss said.

The FDA said it planned to continue “mission-critical work” but had temporarily postponed certain inspection activities through Jan. 19 “with the hopes of restarting these activities as soon as possible.”

Federal courts in California, Tennessee, Ohio, Washington state and New Jersey have suspended in-person jury trails. The U.S. District Court for the District of Columbia cited “an alarming explosion” of Covid cases when it suspended trials until Jan. 24.

Last week, a federal judge said the trial of the Theranos’s former president, Ramesh “Sunny” Balwani, which had been scheduled to start in February, would be be delayed because of the surge of Covid cases in California.

In another case, the lawyer for a New Jersey doctor accused of health care fraud is using repeated delays caused by the pandemic to get her client’s indictment dropped. The first trial date was in June but was postponed several times and is now scheduled for March 1. The judge hasn’t ruled on the motion.

Ailing postal workers are slowing the delivery of mail in some parts of the country. Troy Fredenburg, national business agent for Region 7 of the National Association of Letter Carriers told the Minneapolis Star Tribune that local staffing was down by 20% and that same mail wasn’t going out on time.

The Postal Service said in a statement that it “continues to deliver while managing responses to employee availability challenges due to Covid-19 cases.”

The Internal Revenue Service is already warning of funding cuts and staffing shortages because of the virus will result in delays as returns and refunds are processed.

And State Department employees have complained that Covid restrictions at the agency have grounded all but the most essential travel, hampering the ability of diplomats to do their work.

“As the omicron variant continues to spread, the department takes a prudent and judicious approach to travel plans, especially for overseas travel,” the State Department said.