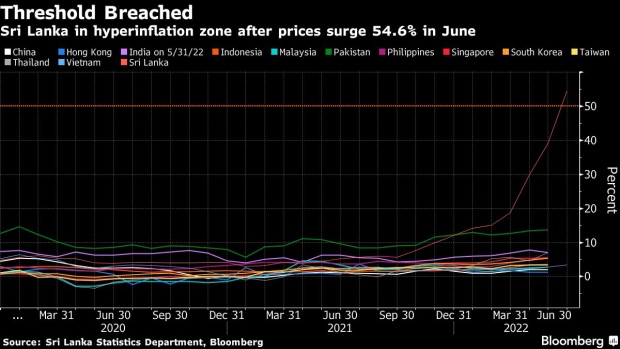 Customers make a queue to purchase fuels at a gas station in Galle, Sri Lanka, on Tuesday, June 28, 2022. Sri Lanka's cabinet of ministers Monday decided to limit distribution of fuel to essential services until July 10, spokesman Bandula Gunawardena said in a televised statement, adding that inter provincial public transport would likely come to a halt. , Bloomberg

(Bloomberg) -- The cost of transport in Sri Lanka’s capital Colombo doubled last month even though most residents were stuck at home due to a severe shortage of fuel, highlighting a crucial dilemma for the central bank.

Governor Nandalal Weerasinghe has to decide on July 7 whether to raise borrowing costs after data Thursday showed price pressures breached hyperinflation levels. Higher interest rates could nip a potential cost-spiral and help meet conditions for a bailout from the International Monetary Fund, but it would also increase debt-servicing outlays for the bankrupt nation.

While keeping the key interest rate unchanged at 14.5% in the previous meeting, Weerasinghe said inflation is driven by supply squeezes as the country has run out of dollars to pay for food and fuel imports. However, the Central Bank of Sri Lanka is on track to print more rupees in a shrinking economy this year than it did when output grew in 2021, which is also fanning costs.

Authorities are printing cash to pay salaries, Prime Minister Ranil Wickremesinghe said in May. Transport costs rose 128% last month from the previous period and food increased 80.1%, even though the government mid-June ordered all non-essential staff to work from home and restricted fuel sales through July 10.

Meanwhile, output contracted in the January-March quarter and economists predict a long and painful recession. Sri Lanka has already defaulted on foreign debt, is being sued by a global fund citing bias toward local creditors, and needs to fulfill major conditions before it can win a bailout from the IMF.

“Given the low level of revenues, far-reaching tax reforms are urgently needed,” IMF executives said in a statement Thursday, hours before the CPI data was released. “Other challenges that need addressing include containing rising levels of inflation, addressing the severe balance of payments pressures, reducing corruption vulnerabilities and embarking on growth-enhancing reforms.”

If monetary policy lacks teeth, fiscal measures will have to do more work. The government is seeking more fuel supplies from neighboring India for cash, according to local newspaper Daily Mirror, as potential creditors are reluctant to offer more loans.

That would only risk adding to the money supply.

“The central bank is caught in the middle. The supply side is strangling us, while there’s no real solution from the monetary side as higher interest rates means crippling economic growth even more,” said Kavinda Perera, head of research at Asia Securities Pvt. in Colombo.

“Lot of focus will have to go into the fiscal side to get out of this.”