As policymakers struggle to control an affordable housing crunch, officials in some of the world’s biggest cities have their sights set on a tactic: taxing the empty homes of the rich.

Los Angeles is planning to put a vacant homes tax on the ballot for 2022, in the face of a mounting homelessness crisis. Hong Kong officials are considering taxing condo developers to deter them from hoarding new units. Ireland is exploring its options. Barcelona has gone as far as threatening to seize landlords’ empty apartments — paying half of market value — and convert the units into affordable rentals. Paris tripled its tax on second homes in 2017.

The rationales vary: Discourage people from parking cash in homes instead of living in them, or stop distortion of supply-and-demand metrics with properties kept off the market. Lawmakers say the trends are depleting inventory, making it tougher for low- to middle-income renters and homebuyers in an already squeezed and pricey global market. The hope is that the taxes fund affordable-housing efforts or push landlords and the wealthy to put their properties on the market.

Not everyone is convinced.

“Vacant property taxes fall into the bucket of something that sounds good but won’t make that big a difference in practice,” said Brendan Coates, economic policy program director at think tank Grattan Institute in Melbourne. “It is a distraction from the main game.”

Economists say factors like record-low interest rates, population growth, an imbalance between supply and demand, and a lack of affordable-housing construction have a bigger impact. Critics say the taxes are more political posturing than a meaningful revenue stream, much less an approach that will make a dent in the global affordable-housing crisis. Some of that comes down to design, some to enforcement. Others worry the concept is flawed altogether. So, can these taxes succeed?

At least some answers may lie in two of the world’s least affordable cities, which each recently implemented levies on “ghost homes.” In Vancouver, which enacted the tax in 2017, revenue has exceeded expectations but rental inventory hasn’t budged. In Melbourne, where the tax was put in place in 2018, the take has been tiny. In neither city is there compelling evidence that homes have gotten any more affordable.

A rental market with near-zero inventory drove Vancouver to implement a vacancy tax of 1 per cent of a property's assessed value.

In 2019, landlords in the city converted more than 5,000 existing condominium units into long-term rentals — which the Canadian federal housing agency attributed at least in part to the new tax. And the levy generated more than $84 million (US$67 million) in revenue from 2017 to 2019, exceeding an initial estimate of $2 million a year. The funds are allocated toward developing affordable housing and supporting renters. 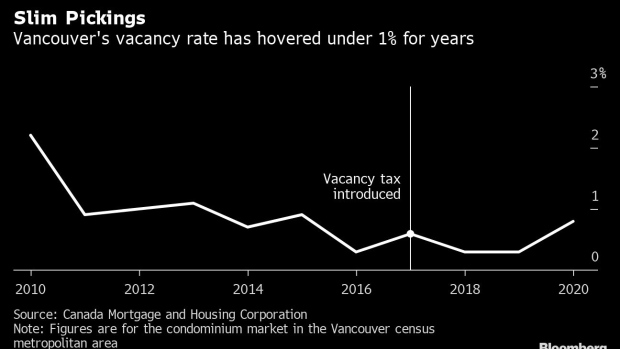 Though those figures are encouraging, Vancouver originally expected there to be more than 10,000 homes that were empty or “under-utilized.” The city actually identified only 2,538 units that fit that description in 2017. That number fell by 25 per cent, or 645 units, over the next two years — a rounding error in a housing market of nearly 200,000 properties.

Though the tax plays well politically among the city’s residents, Mayor Kennedy Stewart indicated there is still room to refine it.

“This groundbreaking tool has helped move thousands of homes back onto the rental market to help house our neighbors, but there are still too many homes that remain empty,” he said last year, when announcing a tripling of the tax.

There’s also been no notable improvement in the availability of condos for rent. The vacancy rate in the broader Vancouver metropolitan area was 0.8 per cent in 2020, up slightly from 0.3 per cent the previous year, according to the federal housing agency. The city had hoped the tax would push vacancy rates as high as 5 per cent, but any new stock has been quickly absorbed.

Meanwhile, rents have continued to rise. The average condo rent in the area rose by 1.1 per cent to $1,914 last year during the pandemic, even as demand for housing waned when students left town and migration to the region stopped. 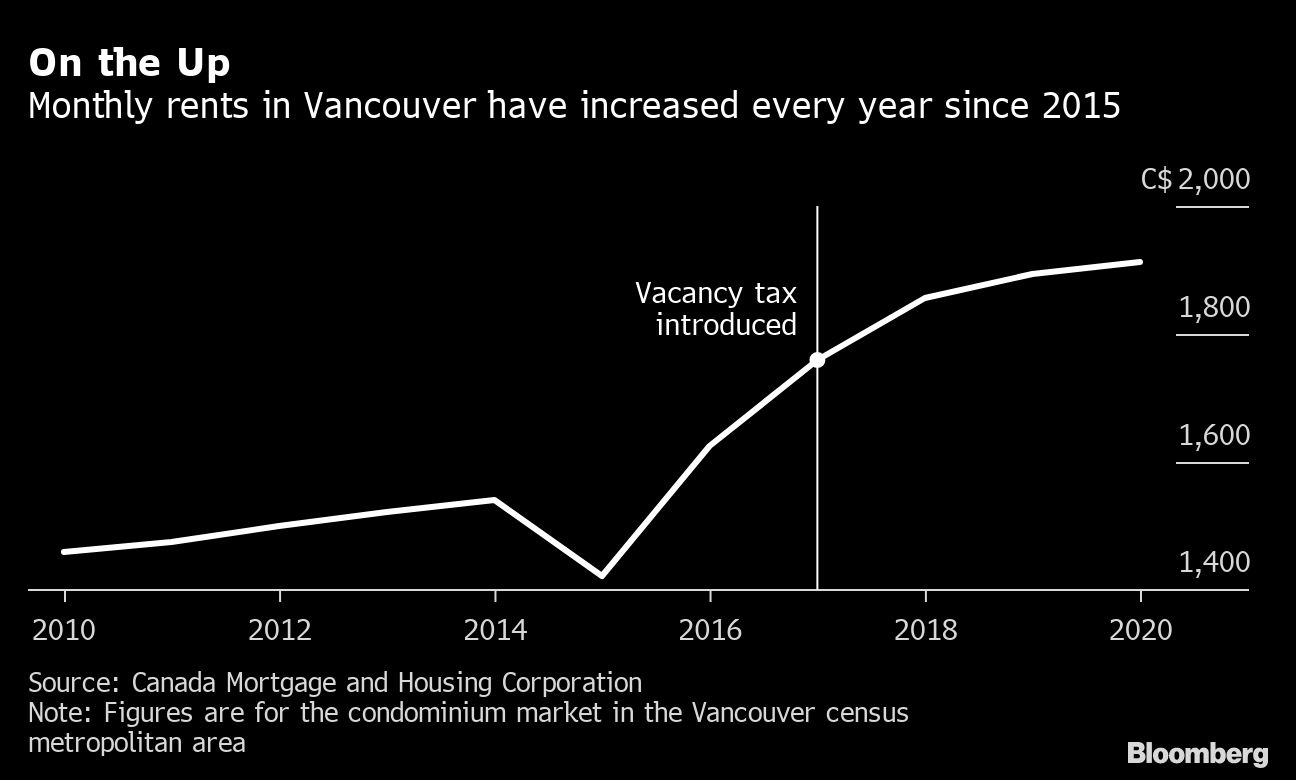 While Vancouver doesn’t provide a detailed breakdown of the values of the empty properties, the aggregate data suggests they are concentrated on the high end. In 2019, the latest year for which figures were available, the average assessed value of a vacant single-family house was $3.5 million, compared with the $2.3 million for such houses across the city.

An analysis of the data from the taxes by statistician Jens von Bergmann, who runs a Vancouver-based data-analysis firm, and Nathanael Lauster, an associate professor at the University of British Columbia, found that pieds-à-terre left empty by overseas owners were probably never as common in Canada as people assumed. Miami, New York, Houston, Phoenix, Chicago and San Francisco proportionally have far more vacancies than Vancouver, the study said. 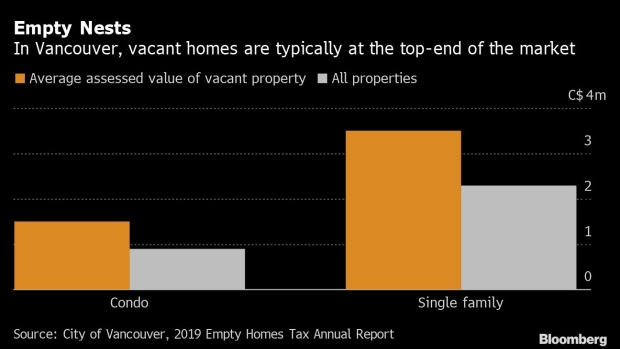 Many of the homes that appear empty actually qualify for exemptions from the taxes, such as the owner being in medical care or traveling, or the property undergoing major construction work.

“We have questions about whether empty homes taxes are being oversold as solutions to the broader housing crises,” von Bergmann and Lauster wrote. “Empty-homes taxes are a pretty good tax. Consider it as equivalent to a bump up to property taxes.”

In Melbourne, middle-class families are finding themselves priced out after a two-decade-long housing boom. And across Australia, the number of low-income households in rental stress has more than doubled in that time.

Melbourne’s tax, like others proposed across the globe, is meant to increase for-sale and rental inventory. In addition, foreign owners of empty homes also face a national tax. 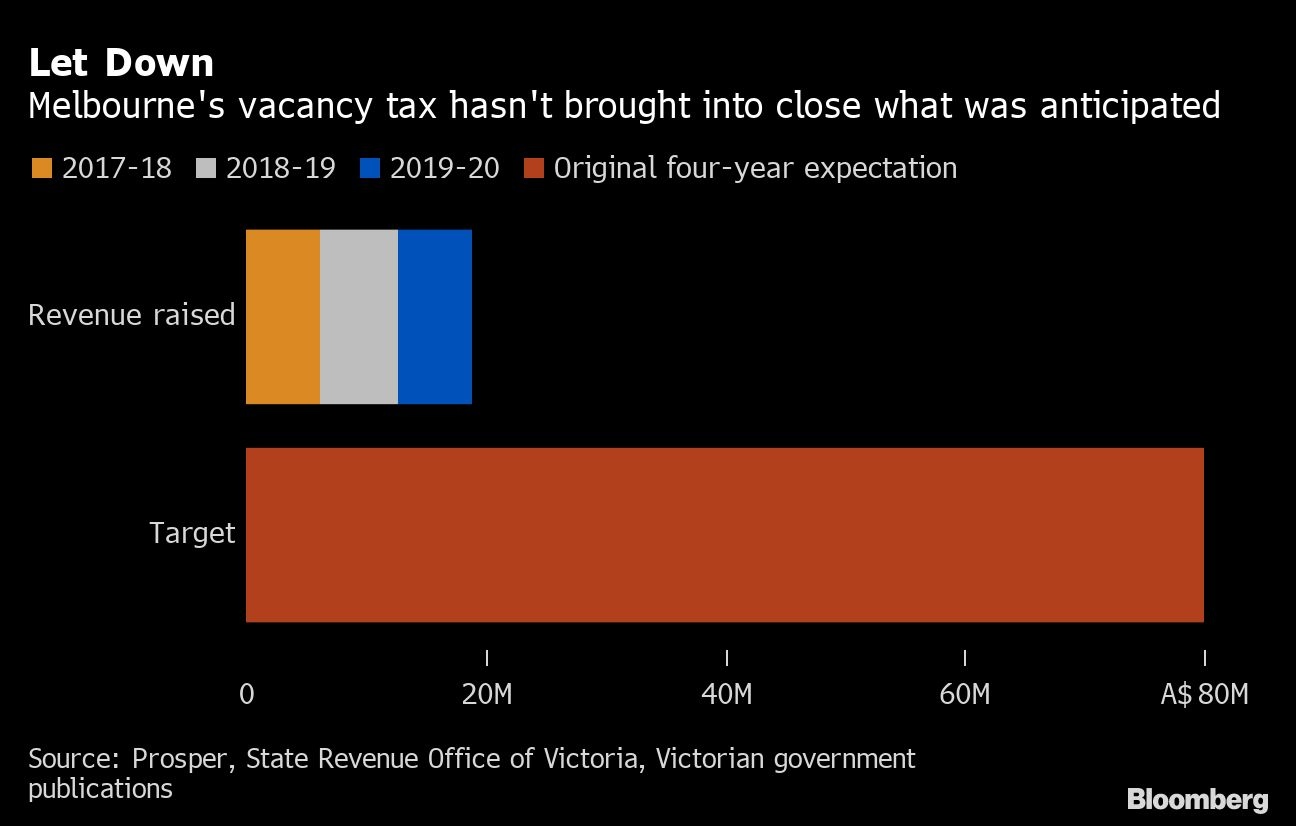 But few have had to pony up. In the year before the pandemic, Melbourne taxed 587 properties raising AUS$6.2 million (US$4.5 million). The original projections were for AUS$80 million over four years.

That’s a huge disappointment to advocates like Karl Fitzgerald, director of research at Prosper Australia, a nonprofit focused on tax reform. In 2019, he estimates, there were 24,042 properties in Melbourne that consumed zero liters of water a day, meaning they couldn’t have been occupied. Prior to the tax’s introduction, real estate professionals pointed out it was easy enough to hire someone to come in and turn on the lights to make a place appear lived in.

“If Vancouver is the best-functioning vacancy tax then Melbourne is the worst,” Fitzgerald said. “There is just no enforcement.”

Fitzgerald now believes that a beefed-up land levy, where both land and property is taxed regardless of use each year, might be a simpler way to discourage speculative buying and encourage developers and owners to make more properties available for use.

The state of Victoria relies primarily on self-reporting from owners, and those who intentionally disregard the law face penalty tax rates of up to 90 per cent. Fitzgerald says he has not found evidence of a single fine being issued for noncompliance. 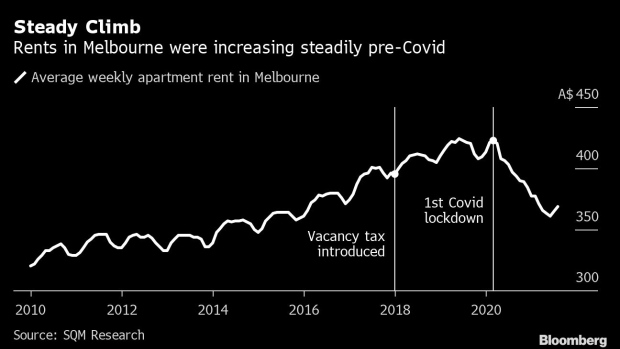 In Melbourne, rental prices and inventory have remained largely static until the pandemic hit: In December 2019 the vacancy rate stood at 2.5 per cent compared to 2.1 per cent in December 2017, according to data from SQM Research. Average weekly apartment rents stood at AUS$409, little changed from AUS$396 two years earlier.

Like many other cities, the picture was upended by the pandemic as vacancy rates spiked and rents fell. Closed international borders meant demand fell from key groups like foreign students, while the widespread adoption of work-from-home policies saw tenants move farther out in search of better value. 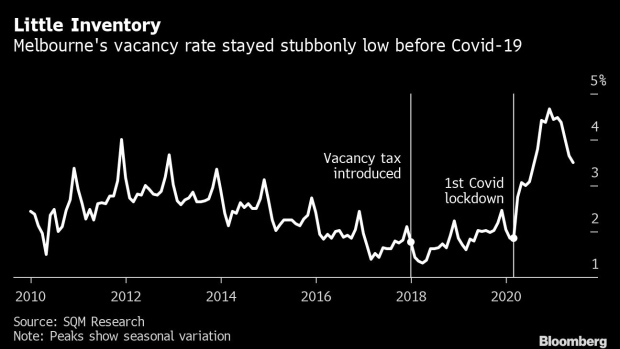 As for the national tax, 340 properties were levied across Australia in the 2019-to-2020 fiscal year, netting the country a grand total of AUS$3.7 million. That equates to an average of AUS$10,882 per property, which on the banding system used suggests the typical property caught under the tax is valued toward the AUS$2 million mark. So even if those homes were listed on the open market, it’s unlikely struggling renters could afford them.

For now, Melbourne has suspended its tax for the duration of the pandemic and at a national level, the Australian Taxation Office said an exemption is available for those prevented from occupying their properties for the required 183 days.

In Los Angeles, where a vacancy tax is on the table for residents to vote on next year, there are “more empty units than we have unhoused members of our community,” said Joe Donlin, the director of research and policy advocacy for Los Angeles-based Strategic Actions for a Just Economy.

The nonprofit published a report last year arguing the city should implement its own vacant-homes tax, citing Vancouver as a place to emulate. It argued that while the tax itself wouldn’t be enough to turn the situation around, noting that vacancy rates are higher for more expensive properties, such legislation would send an important message.

“There’s a great opportunity to affect the behavior of speculators that are keeping units vacant, and generate revenue to develop the kinds of affordable housing that is necessary to house all the members of our community,” Donlin said

For some cities, it’s not just about the redistribution of housing or tax revenue, but the political and moral optics of not having more homes than you need while others struggle to even hold onto one

“These taxes are more about property-market integrity and domestic political issues like housing affordability and availability rather than being an efficient revenue base,” said James McIntyre, a Sydney-based economist for Bloomberg Intelligence. “What really drives housing affordability are things like interest rates, planning restrictions and overall tax settings.”

This year, Vancouver raised its vacancy tax to 3 per cent of the property’s assessed value.

“By tripling the tax from 1 per cent to 3 per cent since the tax launched,” Vancouver Mayor Kennedy Stewart said as he announced the hike, “we're sending an even stronger message that homes are for people, not speculation."