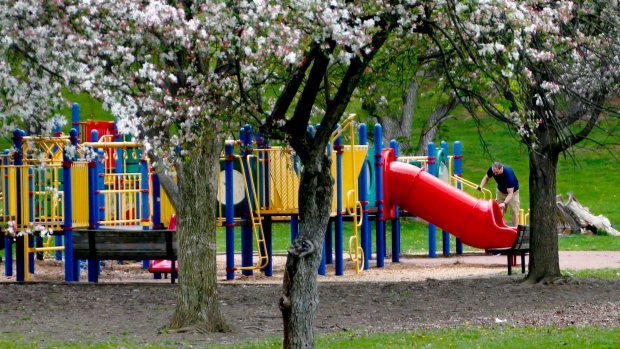 A visitor to Allegheny County's North Park walks with a child through a playground behind blossoming trees on Monday, May 7, 2018, in McCandless, Pa. , The Canadian Press

OTTAWA -- The Liberal government's signature child benefit will undergo a critical review by a federal watchdog amid concerns that eligibility rules that can be "stringent to a fault" are preventing payments to some of Canada's most vulnerable families.

Taxpayers' ombudsman Sherra Profit says her office has received ongoing complaints about difficulty proving or maintaining eligibility for the Canada Child Benefit despite repeatedly raising the issues with the government and the Canada Revenue Agency since the benefit was created in 2016.

In some cases, it means newcomer families to Canada can't receive the payments because they can't get required documents, such as a note from a school or family doctor.

In other situations, women fleeing domestic violence feel like they have to go back to their partner for signatures on forms and other information about custody -- despite the government promising that wouldn't be the case.

Profit said some families who are entitled to the payments and need it to pay their bills can't get the benefit, while others may be ordered to repay the government for benefits the CRA believes they shouldn't have received in the first place.

"If they're already relying on it for their day-to-day living and now they aren't getting it, plus they have to pay back what's seen as an overpayment, we end up with some situations where people are just saying, 'I'm worse off than if I hadn't applied in the first place."'

The Liberals introduced the child benefit in 2016 to bring together three measures aimed at families that would provide more money to more parents, help raise nearly 300,00 children out of poverty, and, the government argued, be simpler to administer.

It is expected to cost about $24.3 billion this year with about 3.7 million families receiving it.

Employment and Social Development Canada sets the rules for the benefit while the Canada Revenue Agency determines individual eligibility and issues the payments.

Federal rules stipulate, among other things, that payments can only go to someone who lives with a child under age 18 and is primarily responsible for their care.

Late last year, ESDC flagged concerns about eligibility rules that may be barriers for at-risk families. Officials planned to look at the eligibility criteria and also changed the application form after Profit's office recommended it.

The CRA has also made some changes to how it handles the administration side, including trying to reach a parent by phone if they haven't received a response within 30 days to a letter about benefit entitlement rather than cutting off payments.

Profit said her office received about 70 complaints regarding the child benefit since the start of the federal fiscal year in April, but cautioned that doesn't capture the magnitude of the problem. Many of the affected people come from groups that don't traditionally file complaints with the ombudsman's office, she said.

"There's just still so many people that are having such difficulty with it that there needs to be something more (done)," Profit said. "We need to look at this from a different perspective."

She said she is aiming to deliver her final report to the government this coming spring before her mandate expires in July 2020.