A lot of damage has been done to TC Energy stock before today's pipeline leak: Frances Horodelski

The shutdown of a key North American pipeline after an oil spill in Kansas roiled the flow of crude supplies across the US at a time when a fragile supply situation has rocked markets with volatility.

TC Energy Corp. declared force majeure on its Keystone oil pipeline system after a spill into a Kansas creek, according to people familiar with the matter. The contract clause is used when a company encounters an unforeseen “act of God” and typically indicates that supply agreements are about to go unfulfilled. The massive crude pipeline, which can carry more than 600,000 barrels a day, was shuttered Wednesday night.

Keystone is a major conduit linking oil fields in Canada to refiners in the US Gulf Coast, and any prolonged disruption will almost certainly put a dent into US crude inventories. Already stockpiles in Cushing, Oklahoma, the nation’s largest storage hub, are at their lowest since July — and at multi-year lows seasonally. Availability has been tight after refineries ramped up processing in response to strong gasoline demand.

West Texas Intermediate oil futures briefly jumped more than 4 per cent, topping US$75 per barrel, before reversing the gains. Physical crude prices on the Gulf Coast also briefly surged on expectations of tighter supplies following the outage. By the end of the trading day on Thursday, prices were back in negative territory as traders bet that at least one segment of the line would restart soon.

The impact to consumers could be limited. A shorter disruption could probably be absorbed by the market after inventories of US gasoline have recently been built back up. Still, a protracted, severe outage for the pipeline would pull gasoline prices higher just as consumers were starting to feel some relief from surging fuel costs that had become a major domestic political issue. 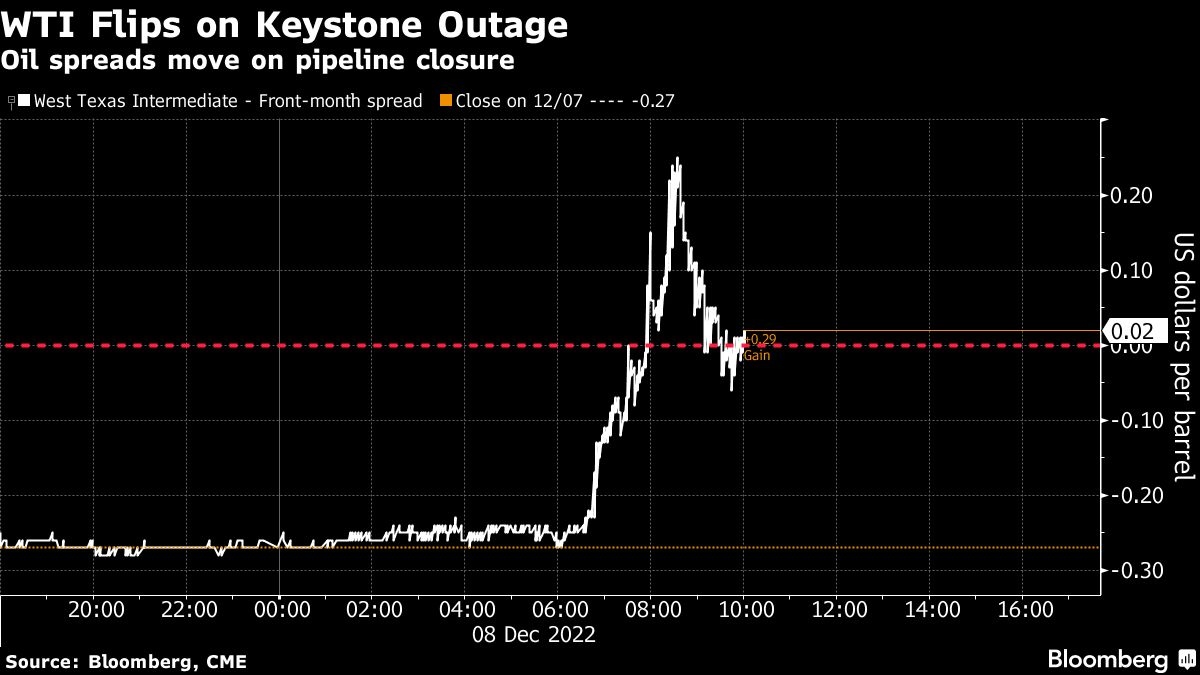 The Keystone system begins in western Canada and runs to Nebraska, where it splits. One branch heads east to Illinois and the other runs south through Oklahoma and onward to America’s refining hub on the Texas Gulf Coast.

The spill follows several other leaks to hit Keystone in recent years. The system was shut in October 2019 after it spilled thousands of barrels of oil in North Dakota.

Traders said they expect the latest outage to last upwards of a week since it affects a waterway, which can potentially complicate cleanup efforts. Calgary-based TC didn’t immediately provide an estimate of how much crude leaked or a timeline for a restart.

The Nebraska Department of Environment and Energy confirmed the incident occurred in Kansas. The Pipeline and Hazardous Materials Safety Administration, a federal regulator, said it deployed personnel to the site of an oil leak near Washington, Kansas, on Wednesday.

“PHMSA’s investigation of the cause of the leak is ongoing,” the agency said.

The impact on US refineries that rely on crude from Keystone will depend on how long the full line or each segment is down. If the segment feeding the Midwest north of where the spill occurred comes online soon, there may not be much impact for refiners in the region.

Energy Aspects Ltd’s head of North American crude, Jenna Delaney, said the main concern is for the refineries near Cushing and those in Kansas that processed as much as 30 per cent of the Canadian heavy sour crude this year from the Cushing storage hub.

“These refineries can’t pull any other heavy-sours aside from Canadian” whereas refiners along the US Gulf Coast can find other suppliers, Delaney said.

It’s likely the spread between Western Canadian Select (WCS), a heavy crude, and the benchmark West Texas Intermediate priced in Houston will “compress due to this outage,” Delaney said, adding that the differential could “easily” narrow “if this outage is going to be extended.”