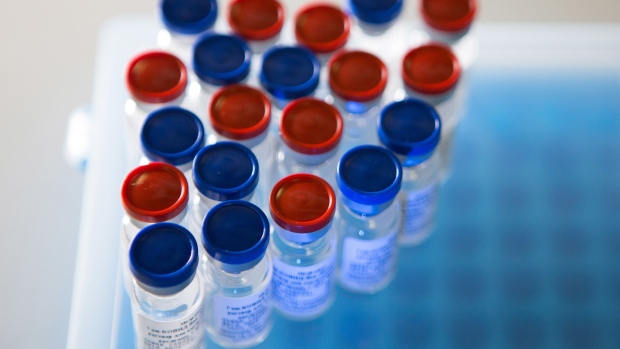 Vials containing the two components of the 'Medgamal' COVID-19 vaccine, developed by the Gamaleya National Research Center for Epidemiology and Microbiology and the Russian Direct Investment Fund (RDIF), stand on display in this arranged photograph at the Gamaleya National Research Center in Moscow, Russia, on Thursday, Aug. 6, 2020. Some medical staff and city government workers in Moscow are being offered the opportunity to inoculate against the coronavirus as Russia is poised to register what it says is the world’s first Covid-19 vaccine. Photographer: Andrey Rudakov/Bloomberg , Bloomberg

(Bloomberg) -- TCV and Inovia Capital are leading a $50 million funding round for a Canadian biomedical software startup that has some of the world’s largest pharmaceutical companies as clients.

The investment in BenchSci Analytics Inc. will be used to expand its software platform and hire hundreds of new employees. The Toronto-based company has developed a way to use artificial intelligence to help researchers sort through millions of scientific papers, speeding the process of developing drugs and treatments.

BenchSci’s customers include Moderna Inc., Bristol Myers Squibb Co., AstraZeneca Plc and Sanofi. The company has doubled its revenue and the size of its team over the past three years, according to TCV General Partner Matt Brennan.

“It’s very rare to see a company of this size with that customer list and the scale of the problems that they’re tackling,” Brennan said in an interview.

“Canadian companies tend to take a global perspective early on. Sometimes companies tend to focus on one country or region specifically, but what I’ve been most impressed with -- and BenchSci is a great example -- is how quickly and capable they are of servicing the entire globe,” he said.

BenchSci’s technology is used by more than 48,000 scientists and 16 of the top 20 global pharma companies, according to the company. BenchSci, which was founded in 2015 by Chief Scientist Tom Leung, Chief Executive Officer Liran Belenzon and two others, aims to save companies time and money by reducing research errors when scientists prepare for and design clinical trials.

“You can go down a whole lot of wrong paths and dead ends if you do it the old-fashioned way,” Inovia Partner Dennis Kavelman said in an interview. “They demonstrated that they can help can bring drugs to market faster and be a much bigger piece of optimizing how these pharma companies do things.”

With the fresh round of funding, BenchSci plans to expand its services to assist scientists with more research and development tasks, such as hypothesis development, and add 200 new employees over the next year. It’s an area of the market that has been under-resourced for years, according to Belenzon.

“There has been investment in software for salespeople and for clinical trials, but nothing for scientists, and it’s mind-blowing to think that a salesperson in a pharma company has more software to do their job better than a scientist that’s trying to figure out the most challenging problems known to humans,” Belenzon said.

The new funding brings total investment in BenchSci to $97 million.