Similar to RBC earlier Thursday morning, TD unveiled an outright reversal of cash that had been set aside for loans it feared could go bad, with $377 million being freed up in the three-month period that ended April 30. A year earlier, TD booked $3.2 billion in provisions for potential loan losses as the COVID-19 pandemic clouded the bank's outlook.

All told, TD earned $3.7 billion in net income during its fiscal second quarter, marking a 144 per cent surge compared to a year earlier. On an adjusted basis, TD's per-share profit was $2.04; analysts, on average, were expecting $1.76. 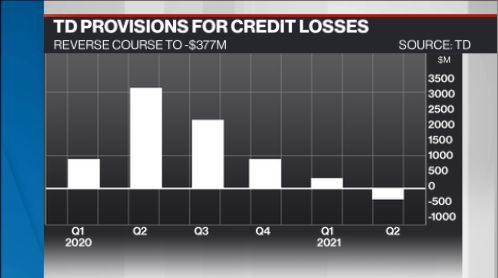 However, some analyst commentary questioned the quality of the profit beat; Scott Chan at Canaccord Genuity Capital Markets said in a report to clients that the performance was “entirely due to better credit,” and added that TD’s core banking fundamentals appear to be lagging peers amid net interest margin compression and higher expenses.

TD closed the quarter flush with cash, as its Common Equity Tier 1 Capital ratio ballooned to 14.2 per cent, up from 11 per cent a year earlier. Canada's banks have seen their capital ratios march higher amid a moratorium on share buybacks and dividend increases imposed by the Office of the Superintendent of Financial Institutions (OSFI) last year in a bid to ensure the lenders could maintain their strength during the pandemic. OSFI has not yet indicated when it intends to lift the suspension on those shareholder-friendly moves. Chan said in his report to clients that the sizable capital on hand positions TD well for “potential sizeable M&A.” 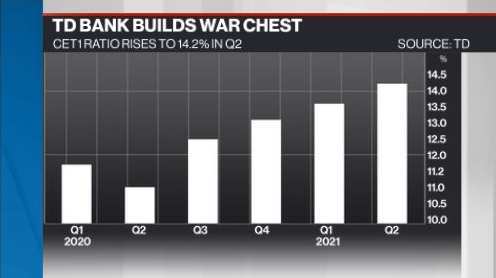 Profit rose in all of TD's major divisions and none more so than U.S. retail banking operations, where net income soared 949 per cent year-over-year to $1.1 billion as the swift improvement in credit quality helped it overcome a deterioration in net interest income.

The bank's wholesale unit managed to post an 83 per cent uptick in net income during the quarter mainly due to a release of $63 million from credit-loss provisions that helped mitigate the impact of revenue falling eight per cent in the period.