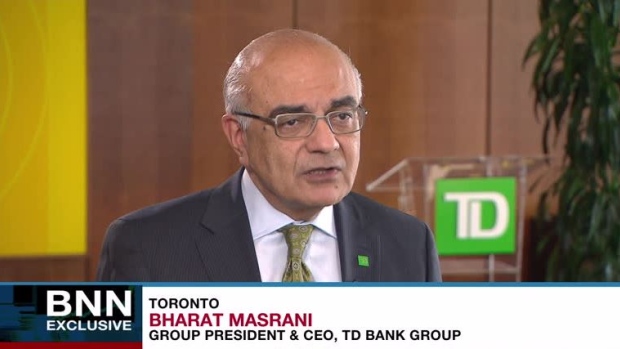 The chief executive officer of TD Bank Group sees no end in sight to the strength in his bank's core domestic market, and he's giving a hat-tip to policymakers' housing market policies for helping set the economy on the right track.

"You saw the GDP numbers this morning," Bharat Masrani told BNN in an exclusive interview at TD's headquarters in the heart of Toronto's financial district on Thursday, hours after Statistics Canada data showed the economy grew 4.5 per cent in the second quarter. "You see the number of jobs that are being created [in the economy]. All of this is positive; the environment seems to have turned for the positive."

TD joined its Big Six peers on Thursday by sailing past third-quarter profit expectations, thanks in no small measure to double-digit growth in the bank's Canadian retail banking unit. That fit with the theme that emerged this earnings season as all of the banks managed to grind out growth in their personal and commercial units in Canada.

Masrani acknowledged the ever-present concern about elevated household debt levels, which he admits is a factor that "one has to worry about." But he's confident that so long as job growth continues and the broader economy builds on recent momentum, those factors will help bring down debt ratios.

Those high household debt levels, along with conditions in regional housing markets, have fed into the so-called Great White Short argument that has seen investors bet against the Canadian dollar and this country's lenders. Masrani suggested in the interview the skeptics might not be looking at the big picture.

"I would just say that Canada is one of the best-growing economies among the G7," he said. "Our fiscal house is more in order than perhaps other countries, and we've had policy moves in Canada to moderate some of the excesses that might have gone on in the real estate business."

Policy makers at the federal, provincial and municipal levels have been grappling for more than a year with price growth that prompted bubble fears in Vancouver and Toronto. Some of the froth has recently come out of the Toronto market, with average prices falling 20 per cent from the April peak as of mid-August, and Masrani said there's no sign of a "huge, hard landing."

He went on to applaud policy makers for doing a "fantastic job" of implementing their rules in an orderly fashion. And while a proposal by the Office of the Superintendent of Financial Institutions to expand stress test rules to uninsured mortgages has made waves, TD's CEO isn't protesting.

"When you're in a rising rate environment, it might not be a bad idea to have some form of stress testing on employment income and whether the debt can be serviced or not."

As hopeful as Masrani is about Canada's economy, he acknowledged there are "many headwinds out there", pointing specifically to trade on the eve of the second round of NAFTA renegotiations with Mexico and the United States. Tension has been mounting ahead of the discussions amid multiple threats by U.S. President Donald Trump to pull his country out of the trilateral trade agreement.

"Obviously, pulling out of NAFTA would be a big event; I don't think that would happen," Masrani said. "I'm sure sensible results will come out of it."

Despite the unknown about how Trump will handle the NAFTA file and uncertainty about his fiscal agenda, Masrani said there's already clear evidence of a resurgent economy in the United States -- and he's eager to build on TD's presence south of the border.

"If you look at our balance sheet in the U.S., we have a lot more deposits than we have loans. That's normally a good thing; but we'd like to find ways to optimize our balance sheet," he said.

"We like the credit card space and we've been doing a lot of deals in that space. We like the banking side, obviously, and if there were opportunities in the southeast of the U.S. we would look at them very seriously."