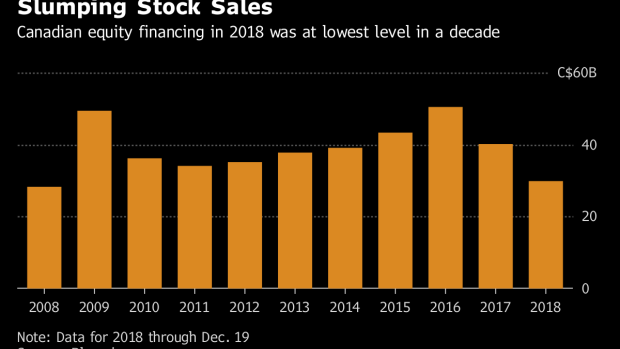 (Bloomberg) -- Toronto-Dominion Bank is on a deal-making winning streak for the year, with its TD Securities division taking the No. 1 spot for arranging stock sales and syndicated loans while eclipsing all its Canadian rivals for advising on takeovers.

“We have an objective of being a top-two dealer in the Canadian market, so it’s satisfying that we’re there,” Bob Dorrance, head of the bank’s TD Securities unit, said in an interview. “We’re starting a new year and we’re focused on continuing to be there.”

The Toronto-based firm’s achievements come in a year of contrasts: In terms of Canadian mergers and acquisitions, 2018 was the second-highest for overall dollar value, and the number of deals soared to the most in at least a dozen years. Yet it was the slowest year for Canadian equity financing since 2008 due to a dearth of energy deals, data compiled by Bloomberg show.

“Canada was out of favor for the most part,” Robbie Pryde, TD’s head of corporate and investment banking, said in an interview. “Our market was underperforming most global markets for a large chunk of the year, and on top of that it was a really slow year for energy.”

Canadian companies raised C$29.8 billion ($22.1 billion) from initial public offerings, secondary sales and equity-linked deals this year through Dec. 19, down 25 percent from 2017, the data show. TD Securities managed 39 financings valued at C$3.71 billion, including being sole arranger for Stella-Jones Inc.’s C$876.5 million share sale in July. Figures and rankings for the year may change as more deals are recorded.

TD moved up one position to replace Royal Bank of Canada as No. 1 in equity and equity-linked deals, and shot up to the second spot -- first among Canadian banks -- from its sixth-place standing in 2017 for advising on acquisitions. The bank retained its top position from last year in syndicated loans.

“They’ve done a very good job in terms of translating the relationships that they do have into profitable relationships for the corporate bank,” Barclays Plc analyst John Aiken said in an interview. “The risk always is it’s flash-in-the-pan, but the way that TD goes around things methodically is that this may, with luck, have some staying power.”

The environment for stock sales will be “more of the same” in 2019, with sentiment on energy and Canada’s inability to get pipeline projects off the ground weighing on the market, according to Pryde.

“Canada is not back in favor,” he said. “Oil differentials are improving but we’re not in any phase yet where I’m going to expect a pickup in the oil patch. I think that the global investor is waiting for Canada to figure out the pipeline situation as well, so that plays into the mindset around investing in our oil patch.”

Pryde is more optimistic about acquisitions activity, forecasting “a decent year,” though one not as good as 2018. Companies in Canada were involved in 2,691 announced acquisitions valued at $246.7 billion through Dec. 19, topping the C$241 billion from 2,366 deals for all of 2017, the data show.

“I’d be satisfied if it matched this year,” Pryde said. “I think that would be a big win, quite frankly, but my expectations are that we won’t match the past year.”

TD Securities advised on 36 acquisitions valued at $86 billion, giving it the highest ranking in the firm’s history, Bloomberg data show. Those transactions put it second only to Goldman Sachs Group Inc. when including foreign banks that typically dominate large deals. Goldman advised on 24 deals with a total value of $92.7 billion.

TD credits the strength of its U.S. franchise for helping land two big cross-border deals this year: Advising Thomson Reuters Corp. on its $17 billion sale of a stake in its financial and risk business to a group led by Blackstone Group LP, the year’s biggest Canadian deal, and working with Encana Corp. on its $5.5 billion, all-stock deal for Newfield Exploration Co.

“In two of our stronger areas, where we’ve been established in the U.S. for some time, it really shone through this year with those larger transactions,” Pryde said. “It really did drive home the strategy that we want to be and are a North American dealer.”

“Over the last few years, the wholesale loan book has had the highest growth rate of all the Big Six banks, so they’ve put the balance sheet to work,” National Bank Financial analyst Gabriel Dechaine said in an interview. “Most of that’s been in the U.S., but the Canadian balance sheet has also expanded.”

TD Securities has reaped the benefits of expanding its wholesale banking platform in the U.S., which has given it more clients in the country and allowed the firm to redefine itself as more of a North American investment bank. The payoff has been on both sides of the border.

“The growth of our U.S. dollar business continues to show success, and that’s important in its own right, as the U.S. dollar and U.S. market is a large opportunity,” Dorrance said. “But it’s also critical to meeting the needs of our Canadian clients.”

--With assistance from Paula Sambo.