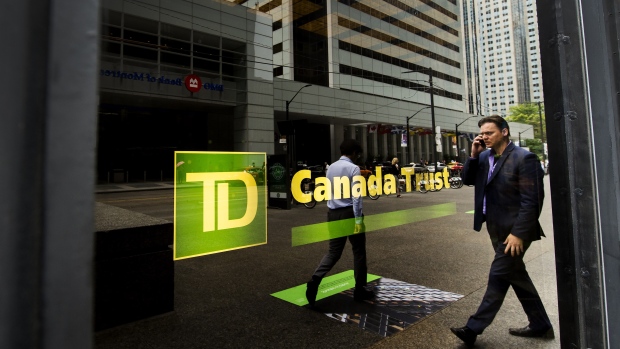 A TD Canada Trust branch is shown in the financial district in Toronto on August 22, 2017. , THE CANADIAN PRESS/Nathan Denette

TORONTO -- A panel at the Ontario Securities Commission has approved settlement agreements with TD Bank and Royal Bank of Canada totalling nearly $24.5 million after the lenders' currency traders shared confidential information in chatrooms to gain a potential advantage in foreign exchange transactions.

As part of a settlement approved on Friday, TD Bank agreed to a voluntary payment of $9,300,900 to the securities regulator and an additional payment of $800,000 to cover the costs of the OSC's investigation.

In a separate subsequent hearing, RBC agreed to a voluntary payment of $13,552,000 to the OSC and an additional payment of $800,000 to cover the regulator's costs as part of its settlement.

As well, internal audit groups at both banks will conduct audits of their compliance with the FX global code, a set of principles for the foreign exchange market.

TD and RBC "failed to meet the high standards of conduct expected of a market participant, which potentially put its customers at risk," OSC commissioner Grant Vingoe said in comments made at both hearings held Friday.

He added that both banks co-operated with the investigation -- a factor considered when deciding to approve a settlement and the amount to be paid -- but noted that TD's co-operation was "exemplary."

The banks agreed as part of the settlements that their currency traders exchanged confidential information, such as the existence of stop loss orders, with traders at other financial institutions over a period between 2011 and 2013.

Both banks also agreed that they did not have a sufficient system of controls and supervision in place in relation to their foreign exchange businesses during that time.

However, both lenders did not admit to a specific breach of securities law and OSC staff did not allege or have any evidence of market manipulation, OSC staff lawyer Cullen Price said.

During the period in question, it was common for currency traders more broadly to communicate with traders at other firms using electronic messaging services, the OSC said in the settlement agreements.

"While the use of such communication tools is not in itself inappropriate, the frequent and significant flow of information between traders at different firms increased the potential risk of traders engaging in improper activity, including, amongst other things, the sharing of confidential customer information," the commission wrote.

Paul Le Vay, a lawyer with Stockwoods LLP representing TD Bank at the hearing, said the lender has worked "continuously" over the last six years to remediate and improve its FX compliance and supervision program. He noted TD -- Canada's second-largest bank by market value -- has since established a policy specifically for its currency traders.

"The bottom line is that TD's supervision and controls environment for FX trading is quite different today than it was six to eight years ago," Le Vay told the hearing Friday.

Lawrence Ritchie, a lawyer with Osler, Hoskin & Harcourt LLP representing RBC, said the bank admits that its supervision and controls during that period were "insufficient" to prevent foreign currency traders from disclosing and receiving confidential information to and from traders at other banks.

"RBC acknowledges that exchanging confidential information can cause risk, including a risk in the public confidence in the capital markets," he told the OSC hearing.

He added that RBC, Canada's biggest lender by market value, is "committed to ensuring a strong culture of compliance."

"This settlement, and the steps taken with staff to reach it, reflects these commitments," Ritchie said.

The factors in the OSC's decision to approve these settlements included efforts by both TD and RBC to improve their compliance and procedures, Vingoe said. He noted that RBC has since prohibited and shut down multi-dealer chatrooms, implemented training and implemented enhanced surveillance of electronic communication. He said TD, among other things, has engaged a third-party consultant to review its market-abuse controls.

The voluntary payments, which have already been paid by both banks, were calculated using several factors including the seriousness of the conduct, whether it is an early settlement and the level of co-operation, the OSC said.

OSC staff also took into account the amount of relevant revenue during the period between 2011 and 2013, which the regulator estimated at $102.87 million for TD and $124 million for RBC.