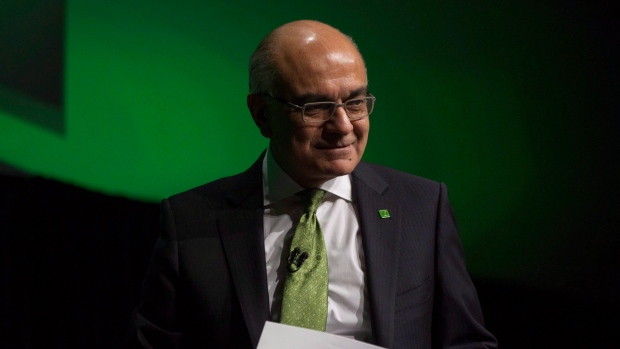 Toronto-Dominion Bank’s fourth-quarter results will be an anniversary of sorts for Bharat Masrani next Thursday. The 60-year-old stick-handled his first earnings report as chief executive two years ago, after becoming TD’s CEO in November 2014. And while Masrani is showing no signs of slowing down two years into the job, recent management moves suggest succession planning could be in the works.

“CEO succession planning starts on day one, as soon as the incumbent CEO steps into the job," said Richard Leblanc, associate professor of law, governance and ethics at York University, in a phone interview. Leblanc advises boards, including financial institutions, on corporate governance. He notes Toronto-Dominion has already been proactively bringing aboard new members to its board of directors, with nine of fourteen being elected over the last six years.

"TD has done a great job of cleaning up board of director succession. Now, CEO succession is the board's most important responsibility," Leblanc added.

The most noteworthy change at TD recently was the surprise announcement last month that Mike Pedersen will retire next summer. Pedersen, who joined TD in 2007, has been running the bank’s fast-growing U.S. retail business and was once seen as a possible CEO candidate. His exit was announced three days after TD made an even bigger bet on the U.S. by teaming up with TD Ameritrade (which is more than 40 per cent owned by TD) to acquire Scottrade Financial Services in deal valued at US$4 billion.

"Given Pedersen is only 56 years old, it signals he might be thinking of greener pastures," according to York University's Leblanc.

With roughly 1,200 branches up and down the east coast, TD is now one of the ten largest retail banking franchises in the United States. As part of the Scottrade deal, TD is acquiring its U.S. retail operations, while TD Ameritrade is acquiring Scottrade’s brokerage business.

“I’m not sure there’s any connection between the Scottrade deal and Mike’s departure,” one source familiar with TD’s strategy told BNN. “But it was no secret Mike wanted to be CEO. When he determined that was not in the long-term plans, he decided it was time to move on,” according to the insider.

TD spokesperson Alicia Johnston declined to comment on Pedersen's departure beyond what was in a recent news release on the matter.

"It's a talent risk when you engage in CEO succession because people who don't get the nod tend to move on," said governance expert Leblanc. "But succession planning is not a bad thing. It's a sign the board is active. Boards don't want to get caught flat-footed."

Pedersen’s departure is signaling to some that TD Ameritrade CEO Tim Hockey could be a contender for TD’s CEO post down the road.

Prior to joining TD Ameritrade at the start of this year, the 52-year-old Hockey had risen through TD’s ranks over 30 years, from bank-teller to eventually overseeing TD’s Canadian retail banking operations. Missing, however, from his resume was experience in running a public company, which he is now getting as the head of TD Ameritrade.

“I think he’s a dynamic, energetic leader,” said Devin Ryan, managing director at JMP Securities, in a phone interview. “He’s a good person to be leading the way.”

Ryan noted Hockey may score points with investors on the timing of the Scottrade acquisition, which was announced before the U.S. presidential election. Donald Trump's surprise win has Wall Street betting on higher interest rates, which should boost Ameritrade's performance. Ryan added Ameritrade's estimates on the return from the Scottrade deal "are looking more conservative by the day. That’s probably a good thing for Ameritrade and TD.”

Fully understanding the U.S. market is seen as a prerequisite for any potential successor at TD. Prior to being named CEO, Masrani spent much of his time building up the bank’s U.S. operations under former CEO Ed Clark. Clark bet heavily on that market, with sizeable acquisitions such as purchasing New Jersey-based Commerce Bancorp for more than US$8 billion in 2007.

Other executives who have been rising up the ranks at TD include Greg Braca, who has helped grow the U.S. franchise for more than a decade. Braca will replace Pedersen next year in overseeing the U.S. operations. Riaz Ahmed, meanwhile, was named chief financial officer in November of last year following a management shakeup.

Masrani’s predecessor spent 12 years in the top job at TD, stepping down at the age of 67. Still, observers note succession planning started early with Clark and his longtime protégé. And quick successions can create unwanted headlines, as was the case with CIBC’s relatively short handover in 2014, from Gerald McCaughey to current CEO Victor Dodig.

“The Canadian banks are extremely well-run companies and absolutely engage in long-term succession planning. The companies are too large and too complex not to,” said Rob Wessel, managing partner at Hamilton Capital Partners, and a former bank analyst for National Bank Financial.