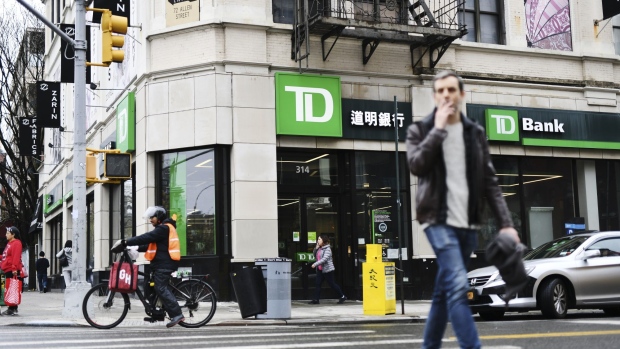 While Toronto-Dominion likes to maintain a conservative capital profile, Masrani said, Canada’s largest bank by assets will consider compelling takeover opportunities that make financial and strategic sense, and have a cultural fit.

“We are good acquirers, we are disciplined acquirers and, frankly, when there has been a major downturn that has resulted in dislocation, TD has taken advantage of it,” Masrani said Monday at RBC Capital Markets’ Canadian Bank CEO Conference.

Toronto-Dominion had a Common Equity Tier 1 capital ratio -- a measure of capital on hand to protect against financial stress -- of 13.1% at the end of its last fiscal quarter. That’s the highest among Canada’s six largest banks.

Those banks have a combined CET1 ratio of 12.3%, well above the 9% that regulators require. That works out to C$70.4 billion ($55.1 billion) in extra capital for the group, resulting in pressure on the firms to put that money to work.

Royal Bank of Canada CEO Dave McKay said that while his firm has “significant organic growth opportunities,” the lender may consider using some extra capital to bulk up its U.S. wealth-advisory, private-banking and commercial-banking franchises.

“We are very conscious of scaling our business, particularly in the United States, in those focused customer areas that we’ve talked about,” McKay said at the conference. “We feel that we have a competitive advantage in providing complex solutions to those customer groups.”

Other bank CEOs put less emphasis on the possibility of deploying capital through acquisitions. Bank of Montreal CEO Darryl White said his firm already has sufficient scale to grow and take market share in the U.S., and that he doesn’t feel a “compulsion to transact.” Still, he wouldn’t rule out dealmaking.

“If we see something that makes sense, that grows our bank and serves us with more customers over time in growing markets, we’ll have a hard look at it,” White said. “But we’ll always look first at serving our existing customers and growing organically.”

Canadian Imperial Bank of Commerce CEO Victor Dodig ranked acquisitions as his fourth-place option for capital allocation. The first three would be organic growth, increasing dividends and buying back shares when regulators allow it.

“If there’s small, inorganic tuck-in opportunities to provide some tailwinds to our businesses, we’re OK with that,” Dodig said.

Bank of Nova Scotia CEO Brian Porter also said he’d focus on organic growth opportunities, such as hiring more commercial-banking officers in British Columbia and Quebec, as well as more salespeople for its mobile mortgage and mutual-fund businesses. But buying back shares, once allowed, would also be a priority, he said.

“When the regulator gives us the green flag to do that, the next day we’ll be out buying stock back,” Porter said. “We think our stock is inexpensive on any historical or current valuation metric.”

National Bank of Canada CEO Louis Vachon said his bank would work to return excess capital through a mix of buybacks and dividends while focusing on organic growth opportunities.

“Buybacks are a complement to a growth strategy, not a substitute for a growth strategy, and we’ll stick to that,” Vachon said. “It’s important to have the franchise grow organically at a nice pace, and then you can top that up a little bit with buybacks.”