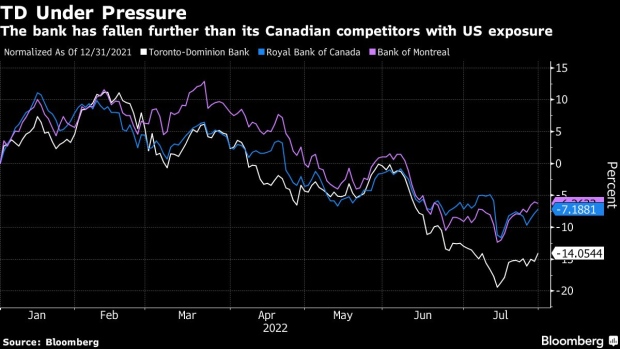 (Bloomberg) -- Toronto-Dominion Bank’s shares are underperforming those of two main Canadian peers that also have big US presences as doubts mount that the lender will be able to complete its takeover of First Horizon Corp.

While investors have been rewarding Canadian lenders that have access to US clients -- potentially providing a stronger defense against a looming recession -- Toronto-Dominion has trailed behind Royal Bank of Canada and Bank of Montreal despite being one of the 10 largest American retail lenders.

That’s in large part because of concerns that regulators may block Toronto-Dominion’s planned $13.4 billion purchase of Memphis, Tennessee-based First Horizon, with President Joe Biden urging tougher oversight of mergers and Senator Elizabeth Warren criticizing the Toronto-based bank over its sales practices. Toronto-Dominion shares have slumped 14% this year, more than Royal Bank’s 7.2% decline and Bank of Montreal’s 6.3% drop, and the worst performance among Canada’s six largest banks.

“There has been quite a bit of underperformance for TD, and you can attribute the majority of that to what’s been happening on the regulatory front,” Stifel Financial Corp. analyst Mike Rizvanovic said in an interview. “When you think about TD’s dynamic on where they make money and where they could deploy capital, if you’re on the wrong side of US regulators, it’s certainly not a good thing because it is such an important market for them.”

Biden signed an executive order in July 2021 -- seven months before Toronto-Dominion announced the First Horizon deal -- that urged regulators to more heavily scrutinize bank mergers as part of a broader push to increase competition in the country. In June, Warren asked regulators to block the deal, citing concerns with the bank’s practices after the Capitol Forum reported that Torono-Dominion wrongly pressured customers into opening certain accounts. Toronto-Dominion has said the allegations are “completely unfounded.”

As for the First Horizon deal, “the regulatory approval process is on track, and we remain confident that we will complete the transaction” in the first quarter fiscal 2023, spokeswoman Lisa Hodgins said in an emailed statement. The transaction “creates value for both organizations, employees, customers and the communities we serve,” with community leaders from regions served by the two banks having sent more than 300 letters in support of the merger to regulators, she said.

By contrast, Bank of Montreal’s own US acquisition -- the $16.3 billion takeover of BNP Paribas SA’s Bank of the West -- hasn’t faced as much scrutiny, in part because the lender is merely changing hands from one foreign owner to another. Bank of Montreal has also shored up investor skepticism about how it would finance the deal with a C$2.7 billion ($2.1 billion) share sale to help fund the purchase.

Toronto-Dominion’s financial results also may be contributing to its shares’ underperformance. The company’s revenue slipped last year, compared with gains for Bank of Montreal and Royal Bank, and growth in its earnings before taxes and provisions for credit losses also lagged behind those of rivals.

Still, a strong US presence may help all three of them if central banks’ interest rate increases push the US and Canadian economies into recession in the year ahead, said Mike Archibald, a portfolio manager and vice president at AGF Investments Inc.

“Canadian bank stocks that have more exposure into just the Canadian market and less in the US have challenges that they may face versus those that have more US exposure,” Archibald said in an interview. “Whether we go into a recession or whether we just go into a growth slowdown, the US will probably grow at a much faster clip than Canada overall.”