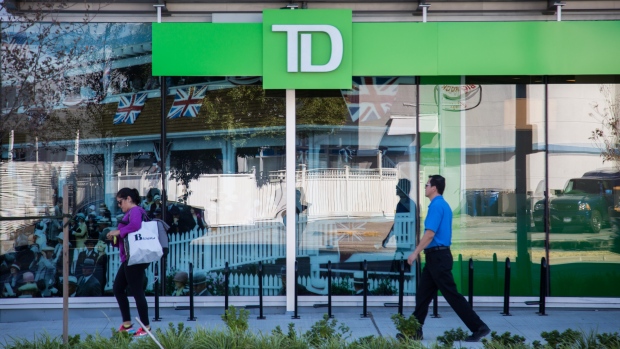 Toronto-Dominion Bank (TD.TO) is seeking to win back customers with home-equity loans -- even as concerns grow over elevated consumer debt amid a slowing Canadian economy.

A push for a greater market share of home-equity lines of credit, or helocs, is part of this year’s strategy for Teri Currie, group head of Canadian personal banking at the country’s largest lender by assets. She wants Toronto-Dominion to be No. 1 in all areas of banking, and she maintains the company’s No. 4 position for these hybrid home loans pitched as mortgage substitutes doesn’t cut it.

“Our goal is to be the undisputed leader in all categories of Canadian banking,” Currie, 54, said in an interview last week at the Toronto headquarters. “We are below our embedded growth opportunity in that product in particular, so I continue to feel comfortable that on a relative basis we’ll have pretty good growth.”

Canada’s economy is cooling after years of growth fueled by real estate investment and consumer borrowing, and as higher interest rates and regulations bite into the housing market. Such a backdrop, along with near-record household debt levels, is making policymakers skittish about borrowing burdens.

The government’s Financial Consumer Agency of Canada targeted home-equity credit lines in a report this month, noting that about a quarter of Canadians with such debt are paying only interest. Over the past 15 years, helocs have been the largest contributor to household debt outside of mortgages.

That has investor David Baskin worried about government stepping in with more rules, bringing uncertainty to banks that have profited from this lending.

“Helocs have become something of a hot-button issue with the debt zealots,” said Baskin, whose firm Baskin Wealth Management oversees $1.2 billion. “I personally don’t think they are a huge issue in Canada as long as rates are low and the loan-to-value ratios are reasonable, which they usually are.”

Toronto-Dominion has two types of helocs, and while the bank has seen little growth in its non-amortizing product, another offering introduced four years ago as a heloc-mortgage hybrid has seen rapid growth. Those loans jumped 33 per cent last fiscal year to $44.1 billion, surpassing the overall size of the older product.

The bank has been playing catch-up to others that have long offered such hybrid loans, and Currie’s effort is more designed to recapture lost business from customers who turned to rivals for those loans instead of an aggressive push for new clients. In the fourth quarter ended Oct. 31, 90 percent of new helocs went to existing customers.

“That outperformance really helped us in 2018,” she said.

Toronto-Dominion is likely to increase its home-loans portfolio by “mid single digits” in 2019, after last year’s 6 percent growth rate, according to Currie.

Currie said she’s comfortable with the risks to the bank and its customers, noting that a “large majority” of its borrowers make principal repayments regularly in those amortizing loans.

Other priorities include gaining more business from business credit cards and mutual funds. Toronto-Dominion has added training for investment advisers in its branches to help them improve customer conversations -- and the bank’s No. 2 standing in funds.

The overall strategy under Currie, who has headed Canadian banking for three years, hasn’t deviated much as the bank continues to push extended branch hours and convenience. Still, the bar to poach customers remains high.

“They’re basically as good as the rest,” Baskin said, adding that taking market share is tough. “It’s very difficult because of the size of the Canadian market for any of the banks to gain a huge advantage over the other banks in Canada: it’s entrenched customers, the market is pretty split up and there’s a lot of inertia.”