Toronto-Dominion Bank agreed to buy First Horizon Corp. for US$13.4 billion, putting its massive capital stockpile to use for its largest deal ever and expanding its presence in the U.S. Southeast.

The Canadian bank will pay US$25 a share in cash for Memphis, Tennessee-based First Horizon, according to a statement Monday. The purchase price is about 37 per cent higher than First Horizon’s closing price Friday.

The deal, which continues the bank’s pattern of growing in the U.S. through acquisitions, would be Toronto-Dominion’s largest takeover ever and Chief Executive Officer Bharat Masrani’s boldest move since taking the reins in 2014. Masrani has been saying for over a year that the lender would consider putting its extra capital to work in a significant U.S. deal if the right opportunity came along.

“Transactions that are strategically compelling, financially attractive, fit within our risk appetite and are culturally aligned are rare,” Masrani said on a conference call with analysts. “We’ve been patient in waiting for the right opportunity, and in First Horizon we have found it.”

First Horizon has 412 branches and more than 1.1 million individual and business customers across 12 states. It has leading positions in Tennessee and Louisiana; a presence in Florida, the Carolinas and Virginia; and “important footholds” in Atlanta, Dallas and Houston, Toronto-Dominion said.

That would move Toronto-Dominion beyond its current U.S. East Coast footprint and give it extra scale in key existing markets such as Florida. The deal would make Toronto-Dominion’s U.S. franchise into one of the nation’s top six banks, with about US$614 billion in assets, the company said. 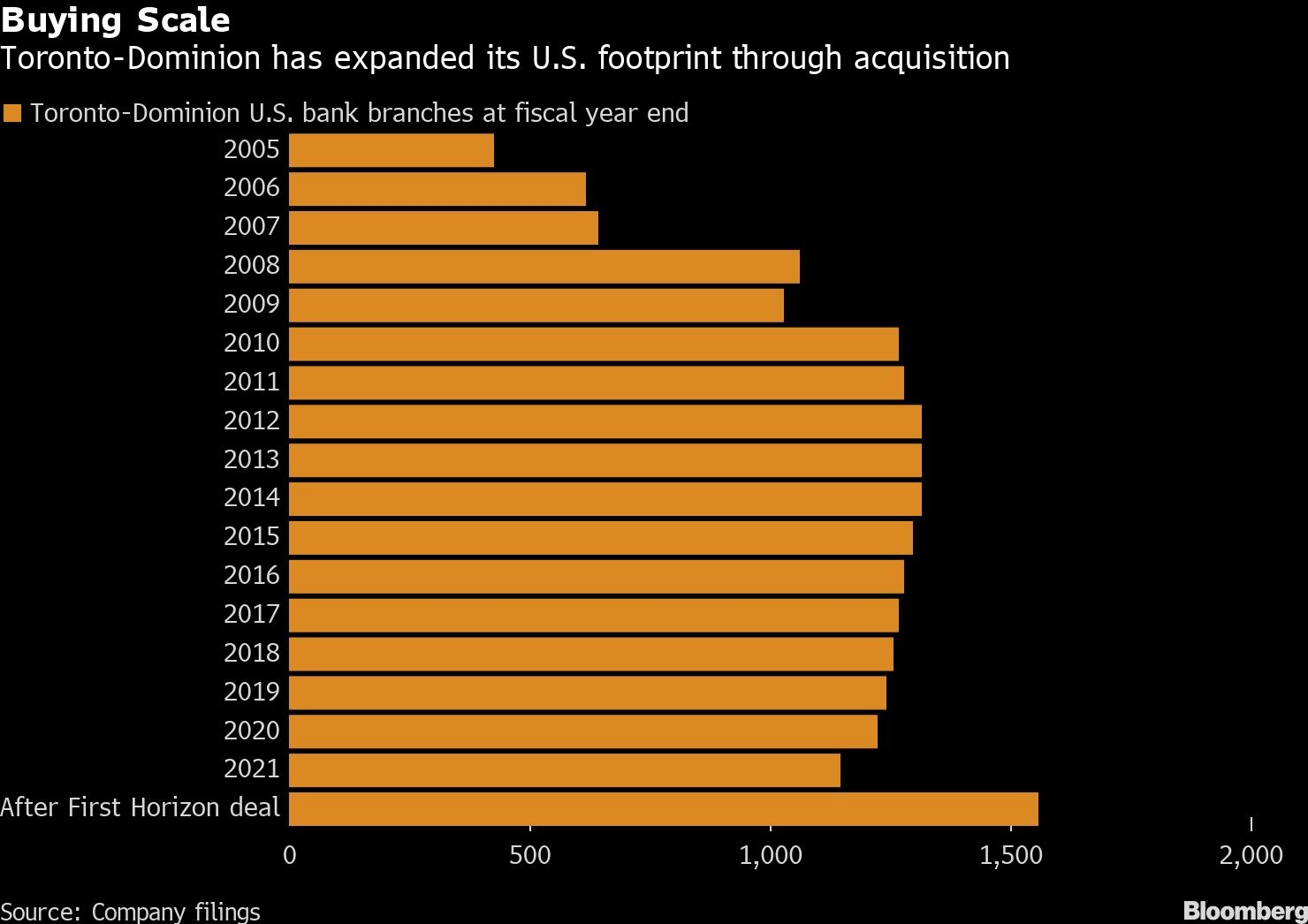 The deal also gives Toronto-Dominion additional capabilities in commercial banking and adds scale to its fixed-income sales and trading business.

The deal helps Toronto-Dominion put to work a large stockpile of capital that it had built up after Canadian regulators prevented the nation’s banks from buying back stock or boosting dividends during the early portion of the pandemic. The lender had about $21.6 billion in excess Common Equity Tier 1 capital at the end of its fiscal fourth quarter.

“First Horizon’s US$13.4 billion deal to sell to TD Bank looks shareholder-friendly, with deal metrics robust at 2.3x tangible book and 14.5x 2023 consensus EPS. The deal removes much of the integration risk from the First Horizon-Iberiabank combination that had previously weighed on FHN’s shares and is an apt culmination of First Horizon’s ‘bonefish’ operating model that stressed profitability, and ultimately, shareholder value.”

“We are positive on the transaction as it not only deploys TD’s significant excess capital profitably but also in-fills its southeastern platform and extends around the Gulf Coast,” Barclays Plc analyst John Aiken said in a note to investors. “Further, First Horizon’s greater concentration in commercial lending should further diversify TD’s portfolio and should generate stronger near-term growth.”

With bank mergers in Canada’s highly concentrated banking sector blocked by regulators, Toronto-Dominion has long looked south for expansion. The firm entered U.S. consumer banking with the US$3.8 billion purchase of 51 per cent of Banknorth Group Inc. in 2004, which gave it almost 400 branches in six states in the U.S. Northeast.

Three years later, Toronto-Dominion doubled its U.S. presence with the US$8.34 billion acquisition of Commerce Bancorp Inc., adding almost 460 locations. Masrani was head of Toronto-Dominion’s U.S. division at the time of the Commerce deal, which took advantage of a stronger Canadian dollar and upheaval at the target that included a U.S. investigation that led to the ouster of its founder.

Even before the planned First Horizon takeover, Toronto-Dominion already had more branches in the U.S. than in its home market.

The First Horizon deal is expected to close in the first quarter of Toronto-Dominion’s fiscal 2023, which starts in November. If the transaction isn’t completed before Nov. 27, First Horizon shareholders will receive an additional 65 cents a share on an annualized basis for the period from that date through the day immediately before closing. And If it’s not done by Feb. 27, 2023, the deal will terminate without an extension.