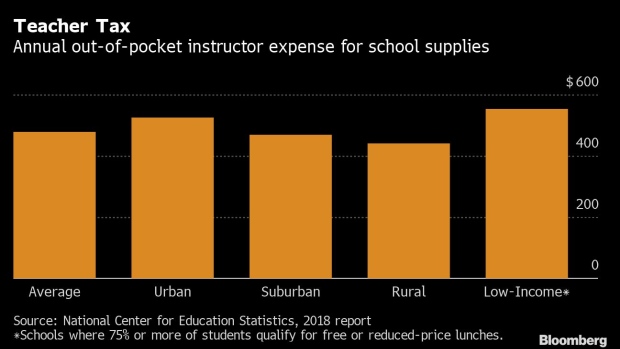 (Bloomberg) -- America’s schools have nowhere near the money they need to reopen safely in the pandemic. To bail themselves out, districts are tapping some unlikely benefactors: the nation’s 3.5 million teachers.

In Columbus, Georgia, Amber Dumbuya is spending more than $1,000, much of it out-of-pocket, to fortify her high school literature classroom. Like the proprietor of her own stationery store, she’s stocking up on dry-erase boards, pencil pouches, highlighters, floor cushions and metal stools. That way, her seniors can study in socially distant pods.

“It’s a tough place to be,” said Dumbuya, whose own son starts kindergarten this year. “And then you get the guilt because that’s money that could have gone toward your 5-year-old and their school supplies.”

Facing shortages, many teachers feel they have no choice but to pay for masks, disinfectant and all manner of items for socially distanced and remote classrooms. So they find themselves in an unenviable position: They bear the health risk of returning to work, and they must subsidize classroom reopening while politicians fight over how much money is needed to do it right.

Teachers have long accepted what amounts to a hidden tax for school supplies. Each year, from their own savings, they spend on average almost $500 for extra pencils, paper and other school supplies, federal data show.

But this school year, if every teacher spends just $100 more, the tab will easily top $2 billion. That’s a conservative assumption. In Georgia, Dumbuya needs more than three times the usual sum, even though classes are only starting virtually this month and may —or may not — be in person in September. To pay some of her expenses she’s fundraising online.

In a socially distanced or remote classroom, teachers are finding that typically shared items — pens, pencils, scissors, books and other learning materials — will now be needed for each child.

Many teachers are mothers asked to return to classrooms of dubious safety while quietly helping make up for deficits. More than three-quarters of U.S. public school teachers are women. At 29, Dumbuya makes roughly $47,000 a year before taxes, health care and mandatory retirement contributions.

“One of the worst kept secrets is that classrooms are funded in large part by what teachers spend out of pocket,” said Noelle Ellerson Ng, who directs federal policy for the School Superintendents Association. “It’s just a reality we aren’t sweeping under the rug anymore.”

The teaching profession was in crisis well before the pandemic. Concern about professional development, pay and stressful work environments have led to high turnover and a shortage of 110,000 teachers, according to a 2019 report by the Economic Policy Institute, a nonprofit think tank. The average teacher makes $57,900, according to the U.S. Department of Education.

Senate Republicans have proposed a bill that would provide an additional $70 billion to K-12 schools, but that may not be enough to safely reopen. More than $116 billion will be needed, according to an estimate from the American Federation of Teachers. Supplies such as hand sanitizer, wipes and thermometers could cost $33 per student during the school year; a reusable mask for every pupil each day, $133.

Asking teachers to subsidize protective equipment such as masks and sanitizer “is a demonstration of the extent of the exploitation teachers face,” AFT President Randi Weingarten said in an email. “Now, in the face of a pandemic, and with lack of any planning or funding from the federal government, it’s become a matter of life and death.”

The need for extra spending will intensify inequality because districts with involved, employed parents are often able to chip in to help teachers with supplies, according to Adam Newman, co-founder and managing director at Tyton Partners, an education-focused investment banking and consulting firm. Teachers in poorer districts on average pay more out-of-pocket, federal data show.

In the Twin Rivers Unified School District in Sacramento, California, some of Lisa Liss’s fifth- and sixth-grade students live in shelters or are homeless. While Liss is teaching remotely, she is making sure each student has a box with all the necessities, and more: pencils, white boards, folders, paper, Kleenex, snacks, books and, at times, even shoes and pillows.

Liss expects many items will need replacing. Last year, she spent $1,500 to $2,000 out-of-pocket on supplies. Even without the expense of field trips during the crisis, she expects to spend $2,500 or more.

“They don’t have the basic supplies at home,” said Liss, 59. “It’s just a real huge struggle.”