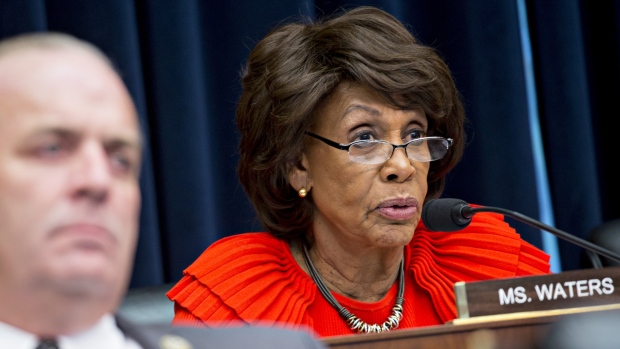 (Bloomberg) -- When Maxine Waters, the Democratic representative from southern Los Angeles, toured Silicon Valley during the first week of May with fellow members of the Congressional Black Caucus, she was blunt about the technology industry's lack of progress hiring black employees. Waters, standing at a lectern in front of a wall of windows at Lyft Inc.'s offices in San Francisco, said she was "floored" to learn that black workers make up 1 or 2 percent of the workforce at several prominent tech companies.

“I’m not about diplomacy,’’ said Waters, threatening regulation. “I’m not urging, I’m not encouraging. I’m about to hit some people across the head with a hammer. I know how to do this and I know how to do it well.’’

Tech companies know that they have a race problem. But their efforts to address it have so far yielded little.

Facebook Inc. says that 3 percent of its U.S. workforce is black, up from 2 percent in 2014. The company has declined to say how many of those people occupy technical roles. Only 2 percent of Google's workers are black, a figure that has remained static for the past three years. The Alphabet Inc. unit's efforts to increase that have sparked an internal backlash, with one former employee suing because of perceived discrimination against white and male candidates.

Among 8 of the largest U.S. tech companies, the portion of black workers in technical jobs rose to 3.1 percent in 2017 from 2.5 percent in 2014, according to data compiled by Bloomberg News. The latest data from the U.S. government, released in 2016, reinforces the point: Blacks made up 7 percent of U.S. high-tech workforce, and just 3 percent of the total Silicon Valley workforce.

The problem has stubbornly remained, even as the representation of other industry minorities — most notably women — has crept up. While there's a disproportionately high number of South and East Asians who work in the tech industry, they're the least likely to attain leadership roles, according to the Ascend Foundation, a group focused on diversity in tech. “It’s a very complex and comprehensive problem,’’ said Allison Scott, chief researcher at the Kapor Center for Social Impact, who has studied the issue. “Some tech companies have thought, if I can bite off a manageable thing — gender diversity — then I can get to race, and that’s a really problematic way to think about it.’’

The numbers aren't just statistics to black employees inside these companies — they're an unsettling hum underlying their everyday work. One black employee at Facebook, who asked not to be identified because he's not authorized to speak publicly, said he was “very lonely” at the office. He participates in a black employee resource group, but said he doesn't have mentors or sponsors at Facebook, even though there are diversity advocates there.

He’s also encountered challenges in the peer review system at the company. Staffers have latitude every three months to choose some of the colleagues they’d like to review. “The more you’re in the club, the more it’s, ‘I’ll review you and you’ll review me and we’ll give each other good reviews,”’ he said.

His co-workers haven’t always been helpful to him when they collaborate on a project, and sometimes he chooses not to ask for help because he’s felt isolated. “The world is whirling around you but you’re not in the loop,” he said. “You don’t know what’s going on and that breeds anxiety.”

Recently he was at a team social event and encountered new black people there — ones he had never before seen at the Menlo Park campus. He said the party reminded him of a scene in the film, “Get Out.’’ Like the movie, the new employees looked like props that were conveniently staged to showcase a more welcoming environment than he felt actually existed.

“We're on the journey, in the struggle,” said Maxine Williams, Facebook’s global head of diversity. “We know the data on how being a minority affects your ability or willingness to show up. It can be isolating. What I have learned is there's no one silver bullet. All I know how to do is have this comprehensive suite to meet people where they are,” referring to employee resource groups, company events and recruiting programs.

Those company initiatives have given solace to Lauryn Ogbechie, a manager of education partnerships whom Facebook provided for an interview.

“Facebook is a family,” said Ogbechie, who’s worked there for almost eight years and helps lead the black employee resource group. “We want people to know they're valued. I'm hoping to find more vehicles to help people at the company.”

Rachael Holmes, a black senior technical program manager at Microsoft Corp.’s LinkedIn, used to work in Human Resources at Google. She endured rude comments about her hair at the office. She also had colleagues she could confide in. Holmes said that diversity efforts felt more like top-down initiatives rather than something everyone cared about, and she left the company because she wanted a job outside of Human Resources. At LinkedIn, she feels that people across the company care about diversity and inclusion. A Google spokeswoman declined to comment.

In a San Francisco manor perched on a bluff overlooking the Bay on a recent Friday evening, more than 100 black and Latino college students crowded around large sheets of white paper taped to windows to show off their coding skills. Representatives from Facebook, Google, Salesforce.com Inc., Dell Technologies Inc. and Intuit Inc. were there to scout talent and teach the students how to ace interviews and network. The event was hosted by the non-profit Management Leadership for Tomorrow, which works to propel more people of color into leadership roles in all kinds of businesses.

“So much of the way business works out here is through networks,” said John Rice, MLT’s founder. “That’s a structural impediment to fostering diversity. What changes perspectives is people from underrepresented groups making money for the company.”

Rice founded the organization in 2001, after a career at the National Basketball Association Inc. and The Walt Disney Co. He’s forged particularly close relationships with Google and LinkedIn.

Alphabet, Facebook and other companies have blamed the difficulty in creating more representative workplaces on the “pipeline” problem— the assertion that there aren’t enough women or ethnic minorities with the educational or professional backgrounds to make them hirable. Rice said that the pipeline is full of qualified students of color, and views his group’s role as connecting the industry to the young talent.While many tech companies have worked with schools to recruit more diverse candidates, a few have partnered with colleges to teach students skills on campus before they graduate. But there have been obstacles.

Infor Inc., an enterprise technology company, partners with colleges to train students on its software, which helps companies manage logistics and resources. Students can use it for free, but growing the program has been hard. Some colleges have been reluctant to participate, and other schools don’t give students academic credit, meaning financial aid can’t be used to pay for the courses.

“We’re all scrambling to find more tech talent, so if you don’t recruit broadly, you’re not going to fill all the slots,’’ said Infor’s chief executive officer, Charles Phillips, a former president of Oracle Corp., who is black. “If you want talent, you need to grow it. And you can’t exclude segments of the population.’’

Some researchers think that free self-tutorial software can help increase the number of underrepresented minorities in tech roles. Salesforce makes a program called Trailhead, which Shonnah Hughes has used to boost her certifications after teaching herself data management skills. She credits the company with catapulting her to the middle class after growing up in public housing.

“Because I don’t have a formal education, people may not take me seriously or think that I know more," said Hughes, who now lives in Apple Valley, Minnesota, a suburb of Minneapolis. "But that is completely irrelevant when it comes to the skills you’ve learned when you’ve worked on the Salesforce platform as long as I have.’’She works for Now It Matters, a Salesforce partner that helps schools and nonprofits adopt the software. In her spare time, Hughes co-founded the non-profit organization PepUp Tech in 2016, to give kids of color the skills and encouragement to pursue careers in tech.

Trailhead has boosted the salary of a quarter of users and has enabled a further 25 percent to find new jobs, according to a survey of users from industry intelligence firm Nucleus Research. But most Trailhead users, like Hughes, aren’t program developers and end up working at companies that aren’t in the core tech industry. The efforts have earned Salesforce plaudits, but the company, which is the largest private employer in San Francisco, has internal diversity numbers that largely resemble those of its tech peers.

Another roadblock to creating a more inclusive tech industry is a measure of diversity fatigue that’s permeated Silicon Valley. Tech workers are taking fewer actions to foster a more diverse environment at work this year than they did in 2017, according to an Atlassian survey of 1,500 people who work in tech. More industry workers believe it is the government’s responsibility to strengthen the diversity pipeline with better education and employment policies.

Maxine Waters’ warning about regulation caused a stir, but many thought it was an empty threat.

“The overarching question is: What form will it take?” said Scott, the Kapor Center researcher. “If you think about affirmative action, there's a long legacy of lawsuits and Supreme Court challenges. But without the mechanism to hold folks accountable, nothing changes.''

The black Facebook employee was more skeptical that Waters and other public officials can make an immediate difference.

“Culture doesn’t change rapidly,” he said. “You can improve the metric, but I think you would still have a broader cultural issue in the company that wouldn’t be solved.”

--With assistance from Jordyn Holman.

To contact the author of this story: Nico Grant in San Francisco at ngrant20@bloomberg.net

To contact the editor responsible for this story: Emily Biuso at ebiuso@bloomberg.net, Anne Vandermey