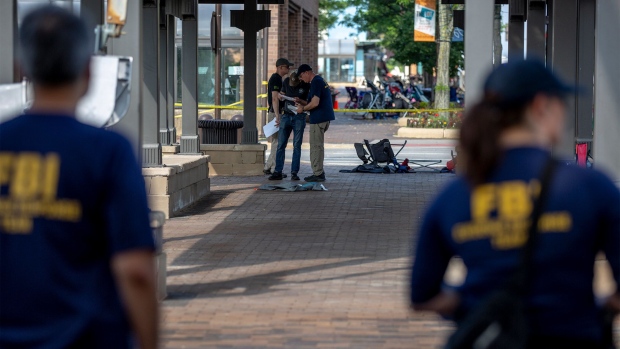 HIGHLAND PARK, IL - JULY 05: FBI agents work the scene of a shooting at a Fourth of July parade on July 5, 2022 in Highland Park, Illinois. Police have detained Robert “Bobby” E. Crimo III, 22, in connection with the shooting in which six people were killed and 19 injured, according to published reports. (Photo by Jim Vondruska/Getty Images) , Photographer: Jim Vondruska/Getty Images

(Bloomberg) -- Mass shooting events like the one that happened July 4 near Chicago typically set off an-all-too-common chain of procedures at tech companies: unearth the attacker’s online presence, capture possibly incriminating posts and quickly shut their accounts.

As frequent as this protocol has become, the companies are still not fast enough to prevent a dangerous knock-on effect of the violence. Social media users themselves swiftly find, circulate and discuss the shooter’s posts, in some cases creating a glorification and amplification of murder that could inspire other shootings and that the technology industry—for all its engineering might—remains ill-equipped to contain.

The man prosecutors say sprayed bullets into a parade in Highland Park had a sizable online presence that internet companies urgently scrubbed, deactivating nearly a dozen of his profiles, according to a review of his accounts by Bloomberg News. Within 48 hours, companies including YouTube, Discord, Spotify and even PayPal permanently suspended the accounts of the accused gunman, Robert Crimo III, all but removing his trace on the open web. But since the mass shooting, which transformed a holiday celebration into a national tragedy, internet trolls and curious onlookers have passed around archives of Crimo’s accounts and picked apart his postings.

“Bloodthirsty trolls and admirers have their own copies of Crimo's work, which they will endlessly obsess over and dissect,” said Emerson Brooking, a resident senior fellow for the Atlantic Council who studies digital platforms. Regular people, too, become curious about a shooter’s motivation in the aftermath of an unthinkable tragedy. “Eventually, these trolls are going to try to smuggle his ideas back into the mainstream. Are companies ready for that? Are we?”

On Meta Platforms Inc.’s Facebook, a link from the file-hosting site Mega was liked and shared dozens of times, mostly in private groups, according to data from CrowdTangle, a Meta-owned social media analytics tool. “They try to scrub the shooter from the internet but night watch is in control,” said one user who shared the link in a group with 19,160 members called “Let’s Go Brandon!!!”—a reference to an anti-Biden political meme. On 4chan, the fringe online message board, dozens of anonymous users scrutinized the message behind an apparently self-published book on Amazon by the suspected gunman, since deleted by the company, which contained just a string of meaningless numbers. After the attack, 4chan users flocked to Crimo’s Discord server, NBC reported, including to post memes about the incident. The server was small and mostly inactive days before, according to a Bloomberg review of the chat logs. It was eventually deactivated.

In response to inquiries from Bloomberg, Alphabet Inc.’s YouTube said its trust and safety teams had removed content that violated its community guidelines, and terminated a channel that violated its creator responsibility guidelines. Twitter Inc. said its enforcement teams were proactively removing content that violated its rules, including posts glorifying violence. Mega said it removed the file shared on other sites, because “it was considered that the collection of material relating to the alleged shooter was likely to be used to glorify him and could inspire other similar actions,” according to a statement from Stephen Hall, executive chairman at Mega Limited.

A PayPal “donate” link associated with the suspected gunman, on an archived version of his website, was deactivated after Bloomberg asked the company whether it violated policies. Amazon.com Inc., Discord Inc.  and Meta did not respond to requests for comment, but removed the accounts associated with Crimo on their services.

Within hours of mass shooting events inspired by extremist views, an online engine begins to churn out propaganda discussing and often honoring the attacker, said Alex Newhouse, deputy director of the Center on Terrorism, Extremism, and Counterterrorism at the Middlebury Institute of International Studies at Monterey. On the chat app Telegram, for example, self-described far-right users have posted Photoshopped images of extremist attackers as “saints” or placed their images on a so-called “mass shooter calendar.” Social media companies on the lookout for manifestos, videos and memes related to the shooter often miss internet craft work-arounds, such as stylized remixes of shooting event footage, that aim to continue sanctifying the events.

Some of this propaganda is intended to sow chaos and social conflict that, some extremists hope, will create conditions for a new society aligned with their views—a philosophy known as “accelerationism.” Other times, posts apparently valorizing these individuals are not explicitly politically motivated; irreverent internet users on forums such as 4chan use imagery from these tragedies to make edgy jokes.

Crimo’s motivations are less traceable to known extremist groups. In fringe communities such as 4chan and Gab, users exchanged conspiratorial theories, picking apart images of him wearing a Trump flag around his shoulders and a rose tattoo as clues for his ideological affiliation.  The online obsession around shooters plays into what many of them envision as their legacy.

“The entire point for a lot of these people is to become valorized and part of this legacy as warriors in the fight for accelerationism,” Newhouse said. After the white-supremacist Christchurch, New Zealand shooting, footage of the attacker’s self-made livestream proliferated across YouTube, uploaded tens of thousands of times per second, and Facebook, where the shooter was praised in groups with as many as 120,000 followers. On gaming platforms, which can host tens of millions of users daily, images of the alleged attacker’s face spread widely. Over 100 users of the PC video game store Steam changed their icons or names to reference the Christchurch attacker. On the video game platform Roblox, some users created so-called simulations of the attack.

This social media behavior can inspire copycat crimes. The May Buffalo shooting, which was motivated by racism, hewed closely to the 2019 Christchurch shooting, placing the attacker within a lineage.

Big tech companies like Meta, Twitter, and YouTube have increased moderation efforts over the last few years in the wake of these tragedies. Gaming and gaming-related platforms have been slower to catch up. It has proven challenging for gaming companies to moderate graphics associated with attackers, such as white-supremacist attacker “Dylan Roof’s bowlcut,” in comparison to photographs or text.

Roblox says it uses a combination of machine learning and trained professionals to moderate “every single image, video and audio file” on the platform, a spokesperson told Bloomberg. Like the gaming chat app Discord, which has struggled to moderate extremist communities on its platform, Roblox employs a team focused on terrorism and violent extremism. Valve, which operates the platform Steam, which has also struggled to moderate extremist content, did not respond to a request for comment.

“Mass shooters count on the online frenzy,” said Melissa Ryan, chief executive officer of Card Strategies, a consulting firm that researches disinformation. “Sadly, at this point, we have more than enough data to establish a pattern. It is part of their game plan for spreading their ideology and getting it in front of a mainstream audience.”