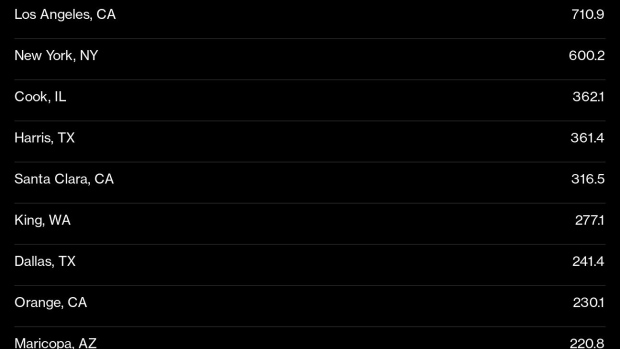 (Bloomberg) -- While the economy in Los Angeles County, home to Hollywood, topped the list as America’s biggest last year, the nation’s fastest-growing large county was to the north in Silicon Valley.

The economy in Santa Clara County -- home to tech giants like Apple Inc. and Alphabet Inc.’s Google -- expanded 10.2% to $316.5 billion, according to data released Thursday by the Commerce Department that included nearly 20 years of county-level GDP data.

Not only was Santa Clara the fastest-growing among all counties with populations exceeding 500,000, but it was also the country’s fifth-largest by GDP. The top 10 counties by GDP accounted for 19% of U.S. GDP, when using the national figures.

GDP represents the total value of goods and services produced over a specific time and can be used to gauge economic health. On the whole, 2,375 counties saw gains in real GDP last year, while economies shrank in 717 counties. GDP was unchanged in 21.

Among medium counties, or those with a population between 100,000 and 500,000, activities centered around oil and gas extraction helped Canadian County, Oklahoma, grow 21%. The Texas counties of Reeves, Loving, Winkler and Martin -- the heart of the Permian Basin, which has driven growth in U.S. oil production -- all showed GDP growth of at least 39% in 2018.

However, a slowdown this year in oil and gas well drilling reduces the chances for such a repeat performance for these energy-intensive areas.

For counties with a population of fewer than 100,000, Jackson County, West Virginia, grew at a stunning 86.5% in 2018, with the construction industry leading the area’s growth. The gain coincided with construction activities related to TC Energy Corp.’s Mountaineer XPress natural gas pipeline. In contrast, GDP in Grant County, North Dakota, declined 44%, as farmers suffered from a drought.

--With assistance from Vince Golle and Dominic Carey.