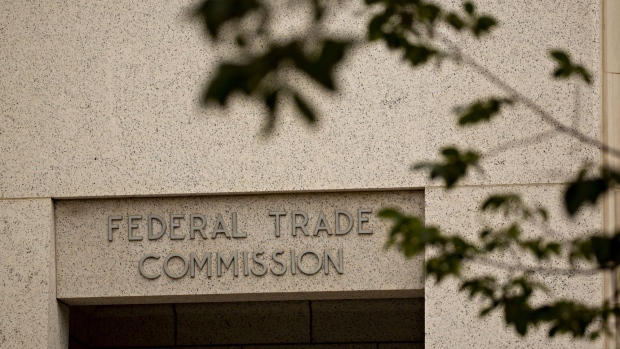 The U.S. Federal Trade Commission (FTC) headquarters stands in Washington, D.C., U.S., on Thursday, Aug. 15, 2019. The head of the FTC this week said he's prepared to break up major technology platforms if necessary by undoing their past mergers as his agency investigates whether companies including Facebook Inc. are harming competition. Photographer: Andrew Harrer/Bloomberg , Bloomberg

(Bloomberg) -- Hundreds of deals by U.S. technology giants flew under the radar of merger watchdogs, fueling the companies’ unchecked growth in the digital economy, according to a Federal Trade Commission study.

“This study highlights the systemic nature of their acquisition strategy,” Khan said about the tech companies during an FTC public meeting. “Digital markets in particular reveal how smaller transactions invite vigilance.”

The findings could bolster arguments that competition cops need to step up scrutiny of acquisitions by tech platforms to curb their power. In July, President Joe Biden vowed tougher merger enforcement of tech companies, saying the industry’s biggest players have used deals to shut down emerging threats to their businesses.

“Too often, federal agencies have not blocked, conditioned, or, in some cases, meaningfully examined these acquisitions,” the administration said.

The data comes from a study the FTC announced last year to examine deals between 2010 and 2019 by the five tech giants to better understand whether acquisitions occurring outside the view of antitrust enforcers could be undermining competition.

The FTC issued orders to the five companies requiring them to provide information about past acquisitions that weren’t reported to antitrust agencies. The companies identified 819 such transactions, including acquisitions of voting control of companies, partial investments, patent acquisitions, and what the FTC called “hiring events” in which a group of employees were hired from another company.

Although the FTC didn’t identify specific transactions by companies, one example is Facebook’s acquisition last year of image library Giphy for about $400 million. Bloomberg News reported last month that before the takeover, Giphy paid a dividend to investors. While perfectly legal, the payment lowered the value of Giphy’s assets so that antitrust officials didn’t have to be notified of the deal under the reporting thresholds at the time.

Antitrust enforcers look at only a fraction of deals that occur every year. Slightly more than 2,000 deals were filed to the government between October 2018 and September 2019, the most recent period reported by the FTC and the Justice Department, which share antitrust duties. The government reviews account for about 10% of almost 22,000 deals announced in that period involving a U.S. company, according to data compiled by Bloomberg.

The U.S. system for screening mergers was created by the 1976 law known as the Hart-Scott-Rodino Antitrust Improvements Act. The law requires companies to notify antitrust officials about deals that meet annually adjusted thresholds. Transactions valued at $92 million or less don’t have to be reported, while those over $368 million do. For deals between $92 million and $368 million, filing requirements are based on assets and sales of the buyer and seller.

Those levels are far below the multibillion-dollar deals that typically garner the most attention. The thinking behind the cut-offs is that small deals don’t raise antitrust concerns and looking at every transaction would be a waste of resources.

Reviewing more deals, however, could strain resources at the Justice Department and the FTC. The FTC has said it’s struggling to handle this year’s record merger levels and has warned that it may extend merger reviews that can’t be completed during an initial 30-day period.

Khan said the study shows that tech companies are devoting resources to acquiring startups, patent portfolios and engineering talent outside the purview of antitrust enforcers. She said the FTC may be “unjustifiably” allowing companies to make acquisitions without any scrutiny.

“While broader reforms to HSR may be overdue, the antitrust agencies must also guard against unduly permissive interpretations that handicap us,” Khan said, referring to the current law.