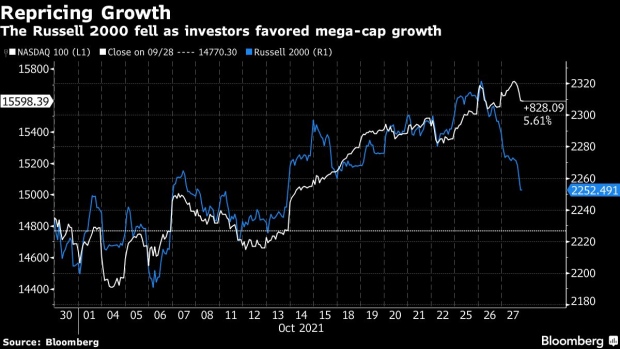 (Bloomberg) -- Stock investors poured into megacap growth shares, briefly sending the Nasdaq 100 to a record, on a bevy of strong corporate earnings and a rally in the global bond market fueled by anxiety over central-bank hawkishness.

The Nasdaq 100 jumped as much as 1.1% to hit an intraday high for the first time since September before wrangling in Washington over how to pay for a federal spending bill cut the advance by about two-thirds. The index closed up just 0.3%.

While earnings from the likes of Microsoft Corp. and Alphabet Inc. helped, signs that the reopening trade was faltering added to demand. The Nasdaq outperformed the small-cap Russell 2000, whose members’ growth hinges on the economy’s prospects, by 2.2 percentage points, the widest gap since mid-July. The Russell 2000 closed down 1.9% in a sign investors are hesitating to buy stocks that hinge on further economic growth.

Signs that central banks from Australia to England and the U.S. are preparing to scale back pandemic-era support for the economy saw investors rush into long-maturity bonds. Data Thursday is expected to show the American economy slowed to 2.6% growth last quarter, the weakest reading since the recovery began. That bolstered demand for the megacap tech companies housed in the Nasdaq, whose earnings prowess can withstand a slower-growing economy.

The positive growth news come after Wall Street braced for an earnings season that would finally demonstrate margin pressures amid rising costs.

In the bond market, the gap between the U.S. 5-to-30 year yield narrowed to the least since March 2020 in a sign that traders anticipate a growth slowdown. Additionally, the Bank of Canada ended its stimulus program, as rampant price pressures push the world’s central banks toward tighter monetary policy.’

“Given how well MSFT and GOOGL reported for the quarter ended 9/30 - with long term growth trends still intact - I think we might be seeing a flight to relative safety and a potentially short term risk-off positioning as evidenced by yields today,” said Renny Zucker, chief investment officer at Capital Y Investment.

This tech trade reflects a common theme during the pandemic: If you’re worried about U.S. economic growth, buy technology stocks that are less vulnerable to an economic slowdown.