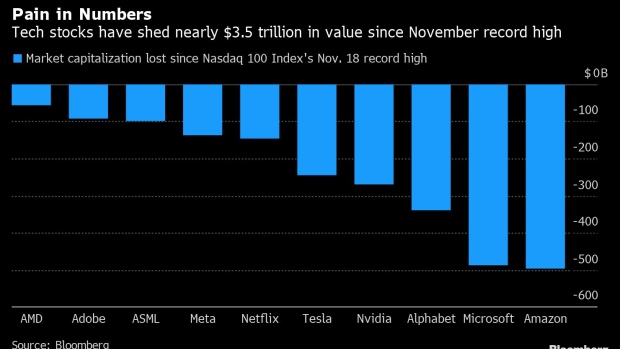 Valuations have sunk to levels not seen since the early days of the Covid-19 pandemic. The tech-heavy Nasdaq 100 Index is at its most oversold level since 2018, while chip stocks are off to their worst start in at least 27 years. And a technical gauge that measures buying strength versus selling strength -- known as the Bloomberg Fear and Greed indicator -- slumped to the lowest level ever.

Netflix Inc., Nvidia Corp. and Tesla Inc. were among the biggest losers Monday on the Nasdaq 100, plunging more than 5%. This was the latest example of weakness in growth names, which have been hammered by this year’s surge in Treasury yields in 2022. Meanwhile, investors are braced for the Fed to reiterate its hawkish policy tilt this week.

The S&P 500 Index is verging on a correction, while the Nasdaq 100 is in the midst of its longest losing streak in more than four months as investors fear that the Fed’s efforts to combat inflation will pinch the sector’s valuations.

“I’m hoping the Fed will calm markets at its meeting, because the selling has been so massive that it has scared away the dip buyers,” Tim Ghriskey, senior portfolio strategist at Ingalls & Snyder, which has about $8 billion in assets, said in an interview. “There’s been a lot of panic selling, aggressive selling, though I think that when it does reverse, it could reverse very quickly.”

The sudden tech rout has sent the stock valuations tumbling to their lowest level since the first few months of the pandemic, and it comes right as the heart of earnings season for the group gets underway.

To be sure, the Nasdaq 100’s forward price-to-earnings ratio is still 25% higher than its average over the past decade even with its valuation down 21% from its 2020 peak. With tech giants including Apple Inc., Microsoft Corp. and Tesla all set to report results this week, investors will be closely watching for signs that earnings growth has started to level off.

It’s been a rapid decline for the Nasdaq 100, which has gone from a record high to correction territory in just two months -- and in the process shed more than $3 trillion in value. The losses have been widespread, with all but 16 of the index’s 101 members seeing their market capitalizations decline during that stretch. Among the biggest losers are some of the world’s largest companies, including Microsoft, Alphabet and Tesla. Amazon.com Inc. has taken the biggest hit, losing $470 billion in market value, which is more than 98% of companies in the S&P 500 are worth.

The tech selloff to start the year has been unrelenting outside of a few short-live rallies. The steady drip has pushed the Nasdaq 100’s 14-day relative strength index below the 30-point threshold for two straight days, triggering its most oversold reading since October 2018. While technical traders often consider such a reading as a signal that a selloff is ending, it’s no sure thing. Back in 2018, the index reached a similar level and dropped another 15% before finally bottoming.

“I think that when the market wakes up to how these growth names continue to grow, that will bring in buyers,” Ghriskey said. “But I do think the Fed should do what it can to calm markets.”