The S&P 500 closed near session highs, while the Dow Jones Industrial Average rose to a record. In a very volatile session, tech stocks finished among the biggest gainers. China’s shares traded in New York briefly extended losses after Bloomberg News reported the Biden administration is likely to preserve limits on U.S. investments in certain companies from the Asian nation.

Applications for U.S. state unemployment insurance fell last week to a fresh pandemic low as labor market conditions continued to improve and the economy reopened more broadly. Separate data highlighted a rebound in productivity as the pace of output exceeded a pickup in hours worked. Traders are now awaiting Friday’s employment report, which is expected to show the U.S. added about 1 million jobs in April.

“With jobless claims hitting a pandemic-era low, anticipation for the full jobs picture tomorrow mounts,” said Mike Loewengart, managing director of investment strategy at E*Trade Financial. “Today’s read is another proof point that we’re one step closer to full economic recovery. As we see some serious momentum building on the jobs front, all eyes will be on how this plays into action taken by the Fed.” 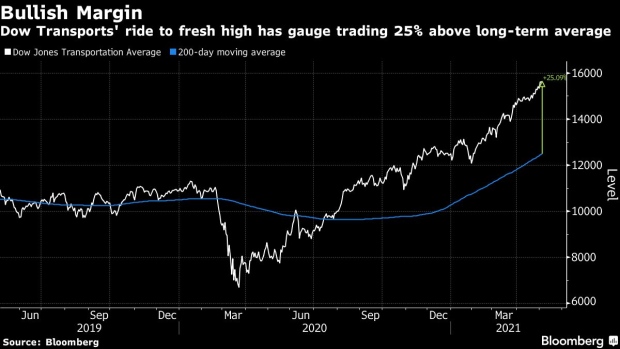 After closing at a fresh high on Wednesday, the Dow Jones Transportation Average -- considered a barometer of economy activity -- surged 25 per cent above its 200-day moving average. The move could be “perceived as indicative of strength likely to continue in the broader equity market,” said Bloomberg Intelligence’s Gina Martin Adams.