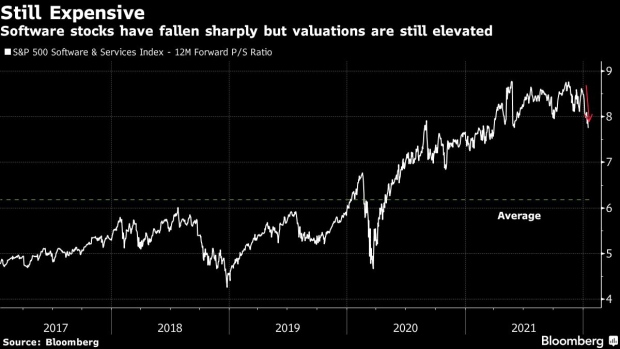 (Bloomberg) -- A couple of high-profile takeovers of video-game companies has stirred optimism that acquisitions will help technology stocks recover from the battering under way in the market now. That sentiment may be premature.

Sure, behemoths Apple Inc., Microsoft Corp., Amazon.com Inc. and Alphabet Inc. are sitting on more than $100 billion in cash and equivalents and buyers also have access to cheap financing if needed. But the Nasdaq 100 Index’s 8.2% slump from its November record doesn’t mean high-flying tech shares are suddenly inexpensive across the board.

Microsoft’s deal for video-game maker Activision Blizzard Inc. and Take-Two Interactive Software Inc.’s agreement to buy Zynga Inc. were both driven by specific strategic goals of the acquirers. Buyers are less likely to step up for unprofitable companies or those with slowing growth, especially in software, where valuations are off the charts, said Brian Barish of Cambiar Investors.

“There is a lot of valuation deflation that can still happen in the space,” said Barish, chief investment officer at the value-focused firm. Bond yields are likely to climb further, and “we do think higher interest rates will press on valuations.”

The Nasdaq 100, more than half of which is tech stocks, has slumped because of the surge in Treasury yields, driven by the Federal Reserve’s plan to raise interest rates to tame inflation. Yet many big-name companies in the benchmark index are still expensive. Adobe Inc., for instance, has fallen 25% from November peak, but is still priced at 13 times estimated sales versus 2.8 times for the S&P 500.

“It’s a great company but that valuation is absolutely extraordinary,” Barish said in an interview.

Among the Nasdaq stocks down about a third or more over the past two months are software makers Datadog Inc., Atlassian Corp. and Zoom Video Communications Inc. Cybersecurity companies Crowdstrike Holdings Inc. and Zscaler Inc. are down similarly over the same period.

Optimists say buyers will sift through the ranks of tech stocks and may indeed snap up those that still have healthy growth or a market niche.

“We’re going to see more M&A activity as companies look at their whole game plans and see prices coming down quite a bit,” said Tom Plumb, manager of the Plumb Balanced Fund, which held Microsoft, Apple, Amazon and Alphabet as of Dec. 31. “A lot of stocks are down at least 50% off their highs, which is the sort of correction we saw in the dot-com era.”

Just how cheap have tech stocks gotten? The Nasdaq 100 Index is now priced at 27.1 times estimated earnings, down from a peak of more than 30 times late last year. For now, the selloff seems to have run out of steam, with futures on the Nasdaq 100 up 0.4% at 6:50 a.m. in New York.