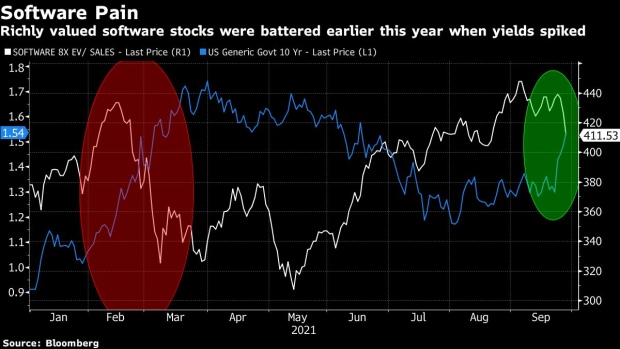 (Bloomberg) -- Think the selloff in technology stocks has been bad? If U.S. Treasury yields keep rising, it’s probably going to get worse.

That’s the widespread thinking on Wall Street as the surge in yields batters growth stocks that have been trading at lofty levels. That’s helped fuel a 2.5% drop in the Nasdaq 100 Stock Index on Tuesday, led by companies like ASML Holding and Mercadolibre Inc., as Treasury rates jumped for a fourth-straight day.

“This surge in Treasury yields is kryptonite for the Nasdaq,” said Edward Moya, senior analyst with Oanda.

The faster-growing companies are more sensitive to interest rates than others because their stock valuations hinge on revenue and profit that’s not expected to emerge for years. To value such stocks, analysts use bond yields to discount those earnings into present-day dollars -- and the higher those yields go, the smaller those future profits appear.

That effect has been particularly acute for software companies, whose projected growth rates rank among the highest. Take Asana Inc. The unprofitable maker of collaboration software is expected to see 58% revenue growth this year and is valued at more than 50 times those projected sales -- showing investor anticipation that revenue will keep surging. Its stock fell as much as 11% on Tuesday.

Software stocks like Asana could be in for a “long fall” if the 10-year U.S. Treasury yield keeps rising toward 2%, Evercore ISI analyst Kirk Materne said. That yield has jumped about 24 basis points since Sept. 22 to 1.54% as traders move forward wagers on when the Federal Reserve will start hiking interest rates.

Materne sees greater volatility for some of the more richly valued stocks in the group, according to a research note published on Tuesday.

An index of some of the most expensive software stocks fell as much as 4.9% on Tuesday. The group was pummeled earlier this year when the 10-year yield rose above 1.5%. Over three weeks beginning in the middle of February, the index dropped 25%.

“That’s the danger, that you get a rotation with portfolio managers chasing relatively cheaper stocks as they see these yields moving up,” said Bill Stone, chief investment with Glenview Trust Co. “It’s particularly dangerous for those stocks with earnings a ways off.”