The reflation trade that has ruled markets for most of 2021 was in retreat Thursday, replaced by a stodgier group of winners that included giant cash-spewing technology companies and longer-dated bonds. The reordering, including a fifth day of losses in commodities, came after Federal Reserve officials signaled they’re preparing to slow stimulus.

Apple, Nvidia and Microsoft helped push the tech-heavy Nasdaq 100 to a record high as investors rotated from cyclical stocks. The benchmark S&P 500 Index finished slightly in the red, while the Dow Jones Industrial Average slumped. Yields on longer-maturity Treasuries tumbled amid speculation investors were unwinding curve steeping trades. The Bloomberg Dollar Spot Index also rose for a fifth day, the longest winning streak since March 2020, making commodities that are priced in the currency more expensive. 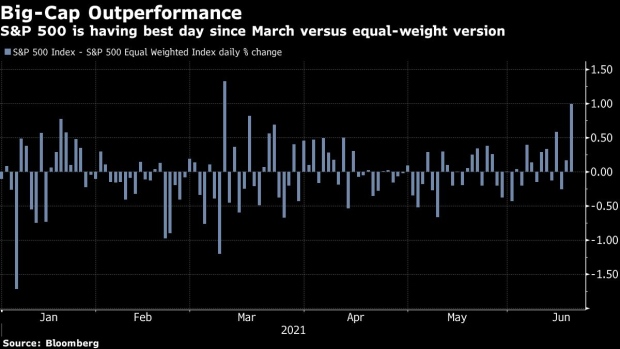 Federal Reserve Chair Jerome Powell acknowledged the risks of inflation and said Wednesday that policymakers had begun a discussion about scaling back bond purchases. Policy makers’ dot plot showed they anticipate two rate increases by the end of 2023, a faster-than-expected pace of tightening. This marked a turning point in the Fed’s communication to global markets, which had so far been ultra-dovish.

While Powell downplayed the risk of any immediate rate increase, some investors interpreted his comments as preparing markets for a hawkish tilt and an eventual tapering. His remarks followed the Fed’s latest projections, which included upward revisions to its outlook for inflation and interest rates.

“2023 is a long way off and I think we’ve already started to see markets stabilize,” said Chris Gaffney, president of world markets at TIAA Bank. “This economic environment is still an excellent environment for companies.”

Elsewhere, CureVac NV plunged 43 per cent in German trading after a study found that its COVID-19 vaccine fell short of targets. The findings, though preliminary, throw the future of the vaccine into question as wealthy nations around the world move swiftly to inoculate their populations with shots already available.

Copper fell in London to the lowest in two months. The rally in metals has stalled in recent weeks and copper has retreated from last month’s record as concerns about cost pressures spurred expectations stimulus that had been supporting the global recovery would be scaled back. Copper producers Freeport-McMoran and Newmont slumped.