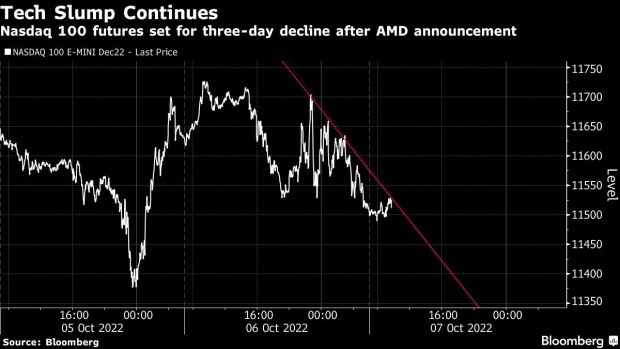 AMD blamed disappointing preliminary results on weakness in the personal computer market, sending its shares and those of other companies involved in the sector lower in postmarket trading. AMD, Nvidia Corp., Intel Corp. and Microchip Technology Inc. were among chipmakers down more than 2%, while computer makers HP Inc. and Dell Technologies Inc. also fell.

The Santa Clara, California-based company’s announcement was followed by a report from South Korea’s Samsung Electronics Co. that its profit dropped for the first time since 2019, underscoring the depth of a global PC and memory chip downturn. Samsung shares slid as much as 2% before erasing losses.

Futures tracking the tech-heavy Nasdaq 100 Index slipped as much as 0.6% during early trading hours in Asia, before recovering. Weak demand and supply chain issues in the semiconductor sector may have already been priced in, leaving futures little changed ahead of Friday’s US monthly payrolls data, according to Tina Teng, an analyst with CMC Markets.

Investors are bracing for a potentially difficult earnings season amid rising risk of a recession with inflation and the strong dollar eating into profit margins. Analysts have trimmed 2023 profit estimates for technology companies at a faster rate than the broader market, though most expect further cuts if results disappoint.