U.S. equities wavered around all-time highs as technology shares weakened ahead of a batch of earnings reports from industry heavyweights.

The S&P 500 was little changed near a record high, with declines in Tesla Inc., Microsoft Corp. and Alphabet Inc. weighing down the index. The tech-heavy Nasdaq 100 fell for the first time in three sessions. 3M Co. contributed the most to a decline in the Dow Jones Industrial Average after it warned that rising costs for raw materials and transportation is a worsening threat. Small-caps rose, pushing the Russell 2000 higher. Treasury yields climbed.

Tesla ended a two-day streak of gains after its earnings report failed to impress investors. Microsoft and Google parent Alphabet are due to report after the close of trading on Tuesday. With much of the earnings optimism already factored into stock valuations, investors may be waiting for stronger beats to fan the next move higher.

Four out of five S&P 500 companies that have released results so far have either met or beaten expectations. On average, shares have gained less than 0.1 per cent after the earnings reports, according to data compiled by Bloomberg. While equity investors have offered a sluggish response, it served to highlight traders’ lofty expectations rather than doubt over the outlook. 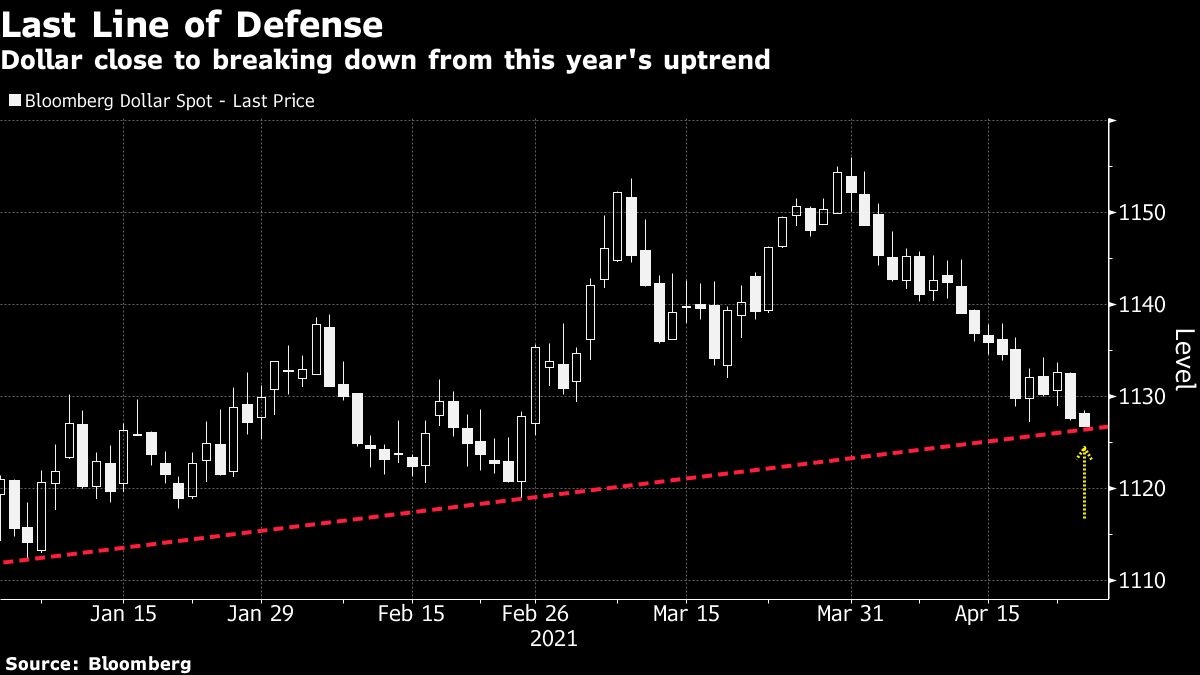 “I think we are seeing some stage fright for tech investors ahead of this afternoon’s big earnings show,” said Mike Bailey, director of research at FBB Capital Partners. “The tech surge in early April sets up a bit more execution risk heading into megacap earnings this week for the tech titans.”

Meanwhile, U.S. data this week are expected to show growth accelerated to an annualized 6.8 per cent in the first quarter. A Conference Board measure Tuesday showed consumer confidence reached the highest since February 2020 as Americans grew more upbeat about the economy and job market.

Such reports aren’t shifting the Federal Reserve’s highly accommodative stance, with the central bank expected to keep policy unchanged at this week’s meeting.

The Stoxx Europe 600 Index slid as investors weighed the scope for further gains. HSBC Holdings Plc rose after saying quarterly earnings more than doubled and returning to profit in Europe and the U.S.

The Bloomberg Commodity Index climbed for a seventh day as copper extended a rally on the Biden administration’s plans for a large infrastructure package. Oil climbed after OPEC+ projected a strong recovery beyond near-term demand destruction from India’s COVID-19 surge.

--With assistance from Andreea Papuc, Haslinda Amin and Emily Barrett.