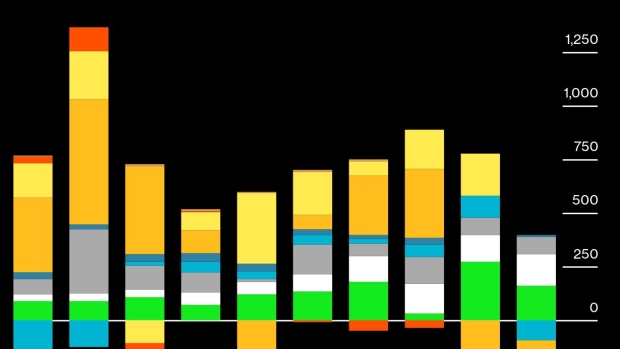 A pump jack stands next to wind turbines near Guymon, Oklahoma, U.S., on Friday, Sept. 25, 2020. After all the trauma the U.S. oil industry has been through this year -- from production cuts to mass layoffs and a string of bankruptcies -- many producers say they’re still prioritizing output over reducing debt. Photographer: Angus Mordant/Bloomberg , Bloomberg

Last year was an unusual one for the global electricity sector. Despite massive and in many cases near-immediate changes in demand due to the Covid-19 pandemic, global power generation fell only two-tenths of a percent for all of 2020. Coal-fired power generation fell 3% year on year; gas-fired power fell 1%, and nuclear power declined 3%. Wind, solar, and hydropower all grew, however, and the result is something new for the power sector.

BloombergNEF recently analyzed a decade worth of data from 137 individual power markets and aggregated data from the rest of the world, and found something significant. Last year was the first year in which renewable wind, solar, hydropower, and biomass and waste power provided the entirety of growth in global power generation.

Let’s zoom out a bit from 2020 and look at the past decade. A full ten years of data highlights other trends. In the chart above, coal’s contribution to power generation growth is very evident through 2014 and again in 2017 and 2018. Natural gas power growth is also evident as are the steady additions of wind and solar power. Nuclear power’s massive post-Fukushima drop in 2011 and 2012 is unmistakable.

It is important to remember that coal remains by far the largest single source of power generation, with more than 8,900 terawatt-hours a year generated in 2020, about 45% more than gas and double what hydropower generates. None of those major sources, however, have a significant growth rate over the decade. Coal grows only 1.6% a year; gas, 2.5%, and hydro, 2.9%.

Wind and solar growth rates allow us to do some simple math with intriguing implications. The first step is to assume that each technology’s 10-year compound growth rate is indicative of what its future growth might be. The second is to apply that rate to each technology’s 2020 global power generation.

Those rates could change over time. That said, solar will likely add more than 180 gigawatts of new capacity this year – more than the greatest amount of combined coal and gas capacity added in any year this century and probably ever – meaning that its compound growth rate will increase.

The power sector’s near future could look different in places, of course. Most forecasters, however, see the near future clearly. Just this week the International Energy Agency found that by 2026, renewables writ large (including large hydro power) will be the single largest source of power generation “based on current policies and market developments.”

And, it may seem imaginative to suggest that in one year’s time wind will be the biggest contributor to power generation growth since 2010, and solar the biggest just two years later. Really, though, it is the opposite of imaginative: it requires only the assumption that the next few years look like the past decade.