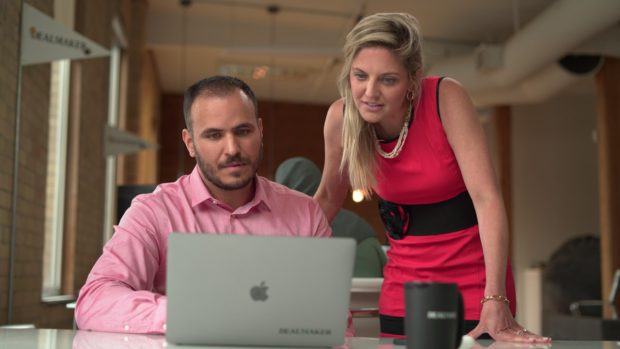 Perhaps no platform stands poised to disrupt the traditional model of capital formation more than DealMaker, a rapidly growing tech-driven company known colloquially as “the Shopify of capital raising”.

Founded by two securities lawyers with deep subject matter expertise, Rebecca Kacaba and Mat Goldstein, DealMaker is bringing the capital raise process into the digital age. With a dynamic e-commerce model. DealMaker allows issuers to tap into a highly engaged market: their own communities of customers, clients, and supporters.

DealMaker’s market impact is driven by its proprietary technology, which is designed to create a fast, flexible, seamless investor experience, allowing issuers to take full control of their raise, their equity, and their investor relationships.

Paired with the platform’s deep data analytics, issuers have full control over how they communicate with investors and even how they price equity shares over the course of a raise – all based on up-to-date, high-quality information.

“Access to an issuer’s own community paired with DealMaker's analytics puts the power in the hands of the issuers. This gives them much greater control over their own raise.” – Rebecca Kacaba, CEO, co-founder, DealMaker

DealMaker’s technology is already changing the landscape of capital raises, and the market is taking notice.

Founded in 2018 by Rebecca Kacaba and Mat Goldstein – both industry experts recognized by the Financial Times as some of North America’s most innovative lawyers – DealMaker already appears as an outlier in Canada’s business landscape, both in terms of its rapid growth and its unflinching ambition.

Recently, Kacaba was named one of Canada’s Most Powerful Women and chosen to receive the BMO Entrepreneurship Award. And according to the Globe & Mail’s Report on Business, DealMaker ranks as the third-fastest growing company in Canada. Having launched to paying customers in 2018, DealMaker has grown by a dramatic 500 to 600 per cent every year since.

Goldstein chalks this success up in part to DealMaker’s crystalline vision for the future of investment crowdfunding. Unlike traditional venture capital or newer Amazon-like marketplace models, DealMaker connects entrepreneurs with global investors directly.

“We live in a world where communities are global, but capital raising is traditionally very geographically siloed and fragmented” says Goldstein. “We are determined to transform communities of fans into communities of shareholders, regardless of where that community is physically located.”

This global vision also makes the most of DealMaker’s deep analytic capabilities. The data gathered by the platform creates insights previously unattainable by most issuers, so the process of raising capital can be optimized from start to finish. These insights allow issuers to zero in on a certain geography where a community is particularly engaged, to raise or lower the cost of a share depending on demand and recalibrate raise efforts as community engagement shifts over time.

“Access to an issuer’s own community paired with DealMaker's analytics puts the power in the hands of the issuers. This gives them much greater control over their own raise,” says Kacaba. “To put it another way: we have made selling shares online as simple as selling shoes online.”

Central to DealMaker’s impact in the market is, in fact, its invisibility. DealMaker tech is always white-labelled – meaning it takes on the issuer’s branding – so the issuer-investor relationship is never interrupted. The platform also offers built-in digital investor documentation (including Know-Your-Client checks) and secure online payments. DealMaker is also a US registered Broker-Dealer, Transfer Agent and offers access to an investor acquisition agency, DealMaker Reach.

“We have brought to market a full suite of functionality,” says Goldstein. “It’s everything you need to turn raising capital into simple e-commerce.”

DealMaker takes over FundAmerica’s book of business from Prime Trust

Recently, DealMaker was tapped to take over FundAmerica’s book of business from its parent company, Prime Trust. The deal doubles the startup’s client base and defines its position as a leader in capital raising within the United States.

In the early days of investment crowdfunding, FundAmerica quickly established itself as the market favourite and has held a dominant position since. When Prime Trust moved to exit FundAmerica, a long process began to find a suitable replacement.

After consideration of a number of platforms, Erin Holloway, President of Prime Trust, explained that DealMaker was selected to own FundAmerica’s book of business because of its proven technology and its team. “[DealMaker] can handle all raise types,” Holloway shared, “they are best suited to address our customers’ needs now and for the long-term.”

“This is a really exciting partnership for us,” Kacaba says of the deal. “It was a natural synergy for Prime Trust to look to us, and this speaks to our scale and capability as a major provider of these services in capital formation. It solidifies our position as the market dominant solution in this sector.”

“It’s a very proud moment for our team. Winning this bid shows that our technology is truly world class,” adds Goldstein.

Kacaba and Goldstein believe that equity crowdfunding with tech like DealMaker can fundamentally change capital raises and their traditional barriers to entry.

Studies have shown that capital markets are not level playing fields; they are wrought with bias. This can lock valuable ideas out of the market and leave money on the table.

In 2020 and 2021, minority and female founders received just 2 per cent of all venture capital funding.

Equity crowdfunding goes some of the distance in rectifying this imbalance. By allowing founders to engage directly with their own communities, founders traditionally excluded from venture capital spaces can source funding without having to surmount the disproportionate barriers they may face.

“It is very gratifying for me to see more women founders getting funded, and to see the positive impact DealMaker is able to have on the capital markets,” says Kacaba. “We’re seeing minority and female founders earning closer to 30 per cent of crowdfunding dollars in this space. This is a different way for them to go to market, and it’s leading them to find greater success.”

Today, more and more entrepreneurs are finding their backing in equity crowdfunding.

The growth of Equity Crowdfunding seems to be tearing down barriers to entry for the underfunded, permitting consumers access to new investment opportunities previously available only behind the gilded gates of Wall Street, and unlocking more capital in the market.

DealMaker has both illuminated the need for an alternative to venture capital raises and provided an effective solution. As a one-stop shop for both issuers and investors, DealMaker sets itself apart from other crowdfunding platforms by acting not as a marketplace for capital raising but as a seamless connector of entrepreneurs and their communities.

The platform’s technology can enable thousands of investors from around the world to purchase equity shares in their favourite companies and organizations – a feat previously rendered essentially impossible by the manual nature of many capital raises.

Miso Robotics, a food technology company part of the portfolio of Vebu Labs (formerly WaveMaker Labs), raised capital through multiple rounds of equity crowdfunding. Their first rounds were through the traditional portal method where you ‘rent’ access to an investor pool. However, this approach left them feeling restricted in their ability to maximize their return, so they decided a self-hosted raise would give them the ability to own their investor pool as well as build their brand. Leveraging DealMaker’s white-label capital raise platform, Miso Robotics was able to raise over $34M from over 5,300 investors and when compared to their previous raises, they saw their average investment amount increase by 68 per cent.

“We’ve really only scratched the surface of what online capital raising can be,” says Goldstein. “This is truly just the beginning.”

So far, DealMaker has powered over 689,000 investment transactions totalling over $1.7 billion in raised capital, and the leadership team has big plans for the future.

“There's never been so much interest in equity crowdfunding as there is today, especially with so much turbulence in the economy,” says Kacaba. “We're excited to keep bringing this kind of seamless offering to the market so people can raise capital in a better, faster, cheaper way.”

For more information on how DealMaker is innovating the capital raise process, check out their website here.

Want to keep up with the company’s latest news? Follow DealMaker on social media: