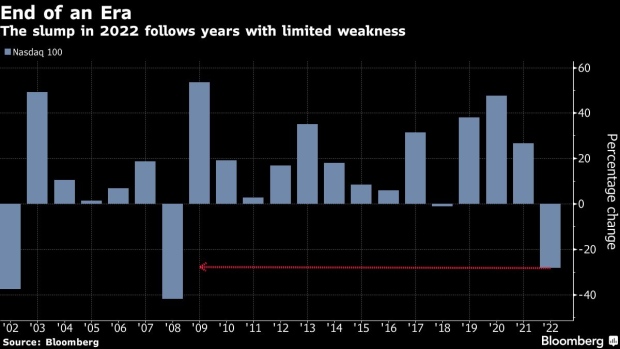 (Bloomberg) -- Skeptics have long made a sport of predicting that the decade-long rally in technology stocks was destined to reverse. At the halfway point of 2022, it seems like this is the year when they will be proven right.

The Nasdaq 100 Index has tumbled by almost a third this year, erasing some $5.4 trillion in value in a selloff that has left few stocks unscathed. The benchmark, which gets half its value from tech, is on track for its biggest calendar-year decline ever.

And it’s hard to make a convincing case for a market recovery in the second half: Investors are pricing in further interest rate increases from the Federal Reserve as the central bank tries to combat inflation, sparking concern that the global economy will tip into recession. Analysts are beginning to cut earnings estimates for technology companies as a result.

“The issue is that we haven’t really seen inflation like this in decades,” said Michael Nell, a senior investment analyst and portfolio manager at UBS Asset Management. “Since 2009 or so we’ve had very low rates that contributed to the years of strength we saw. However, those low rates weren’t going to last forever.”

Here’s a look at the first half of the year for tech:

From Feast to Famine

Some of the biggest winners of the pandemic years morphed into the worst performers in 2022, among them streaming giant Netflix Inc., telemedicine company Teledoc Health Inc., and companies such as Zoom Video Communications Inc. and DocuSign Inc. that benefited from the rise of remote work.

At this rate, the Nasdaq 100 would finish the year down 49%, the biggest annual collapse in the almost four decades that Bloomberg has tracked the benchmark. The last time the index fell in a calendar year was 2018, when it dipped 1%, and its last notable decline was in 2008. It had bigger peak-to-trough plunges in the wake of the late 1990s internet bubble -- an 83% wipeout -- and in the 2007-2008 crisis, when it dropped by more than half.

Selling this year has raged across industries, with long-time market leaders collapsing. Apple Inc., Microsoft Corp. and Alphabet Inc. have all lost more than 20%, Amazon.com Inc. is off 35%, Nvidia Corp. is down almost 50%, and Meta Platforms Inc. has lost more than half its value. Indexes of semiconductor and software stocks have both fallen by about a third.

This year’s successive selloffs have cut some of the biggest technology companies down to size. The Nasdaq 100 now has 21 members with market values of $100 billion or more, down from 33 at the end of last year.

The oldest of old tech has been a pocket of strength in the market. International Business Machines Corp. has returned almost 8% this year including dividends. Of course, the strength comes after an extended stretch of massive underperformance. IBM has returned 21% over the past five years versus more than 150% for the S&P 500 tech index.

IBM’s year-to-date gain reflects investors’ shift into cheaper, dividend-paying stocks and out of highly valued growth stocks that have led the market for years. IBM trades at less than 14 times estimated earnings, a discount to the market, and yields 4.7% annually in dividends, the highest among tech companies in the S&P 500. Nasdaq 100 companies that pay dividends lost 10% in the past year, compared with a 25% decline for those that don’t.

“Quality and value is probably the best place to be in the short term,” said Michael Arone, chief investment strategist at State Street Global Advisors’ U.S. SPDR business. “A lot of the names we’ve seen outperform this year have low variance in their earnings, good cash flow, they pay dividends, and they’re relatively stable businesses.”

‘Light at the End of the Tunnel’

Bulls hold out hope that this year’s market plunge will bottom out as investors embrace the technology industry’s long-term growth potential and cheaper valuations. The Nasdaq 100 is now trading at about 19.5 times estimated earnings, well below a 2020 peak above 31, and under its 10-year average of about 20.1.

Nell, of UBS Asset Management, is among those keeping the faith.

“We expect tech will eventually resume its leadership position,” he said in a phone interview. “There are always ups and downs, but the long-term trend is one of tech outperformance. We see light at the end of the tunnel we’re in.”