Three U.S. stocks to help position your portfolio for a rising rate environment

The stocks of U.S. technology companies are seeing the worst start to a year since 2016 as fears about runaway inflation imperil the heady valuations left by the market’s run up over the past few years.

Following multiple failed attempts this week to rally back strongly, investors remain hesitant to plow heavily back into shares of growth stocks and there’s still no major signs that the pressure on technology companies will abate anytime soon.

The Nasdaq 100 Index, which includes some of the nation’s technology behemoths, is down more than 4 per cent this year, even after a bounce late Friday that erased its losses from earlier in the week. The broader Nasdaq Composite Index fell for a third straight week.

High-flying growth stocks are being particularly hard hit by the growing conviction that the Federal Reserve will soon start withdrawing the massive monetary stimulus that has kept the financial system awash in cash since the pandemic hit.

Worries about rising rates were fueled by data this week showing that U.S. consumer prices soared last year by the most since June 1982 while U.S. retail sales fell in December by the most in 10 months, indicating that higher prices may be dissuading consumers. That threatens to put further pressure on tech stocks with valuations based on future profit growth, since higher interest rates reduce the present value of those expected earnings.

“The Nasdaq has stumbled out of the gate in 2022,” Douglas Porter, the chief economist at BMO Capital Markets said in a note to clients. While he said these high-flying companies have tremendous long-term potential, those distant earnings prospects face “the cold calculation of being discounted by current yields, so the Fed’s sudden turn is a clear-cut headwind for lofty valuations.” 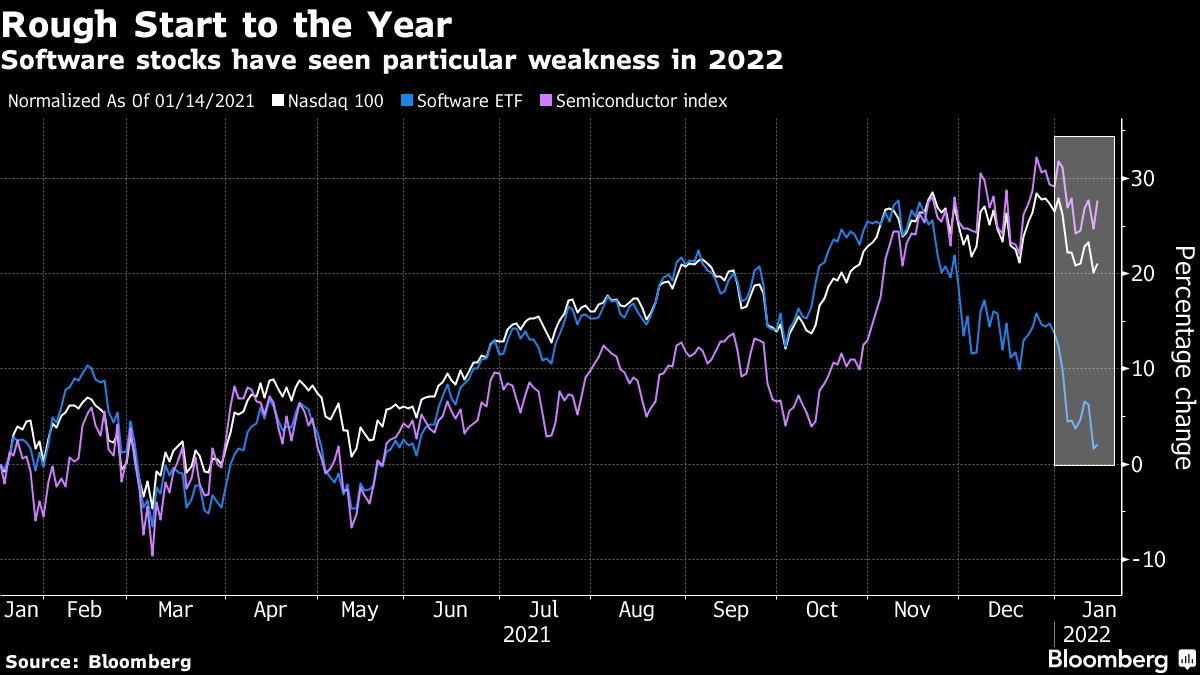 The market is widely expecting the Fed to start raising interest rates in March and begin reducing its stockpile of bond holdings in the second half of the year, removing a source of support for the Treasury-bond market. Fed Chair Jerome Powell this week told the Senate Banking Committee that he’s prepared to raise interest rates more than expected if needed to get inflation under control.

“Inflation has gotten really high, to multi-decade highs, and that’s really become a problem for the market,” Randy Frederick, vice president of trading and derivatives for Charles Schwab & Co., said in an interview. “We’re going to get a rate hike in March, but that is still a ways out, and the market could continue to struggle if inflation remains high in the meantime.”

Even with the recent volatility, the tech sector by and large remains a long-term outperformer relative to the overall market. The Philadelphia Stock Exchange Semiconductor Index is up nearly 40 per cent since the start of 2021, while the S&P 500 information technology index is up 27 per cent. The overall S&P 500 index is up about 24 per cent over that same period, with names like Apple Inc., Microsoft Corp. and Alphabet Inc. all outperforming the benchmark index.

One exception is the software industry, which has seen some of the heaviest pressure as investors rotate out of high-valuation growth shares. Since hitting a peak in November, the iShares Expanded Tech-Software Sector ETF has been on a pronounced downtrend, with drops during the past three weeks that have driven it back to where it was at the end of 2020.

Big Tech stocks like Apple and Microsoft, for instance, have strong balance sheets, and larger, established, dividend-paying companies could hold up well if there is a move among investors toward quality stocks, according to Frederick. But that’s not as likely for micro-cap stocks, which have typically been more volatile and less liquid than shares of larger companies.

“We have to see a stabilization in rates, and more certainty about what economic data looks like overall, before you’ll see people move back into these growthier names,” Frederick added. “Valuations have come down a lot, but it may take a little bit of time before they come back.”