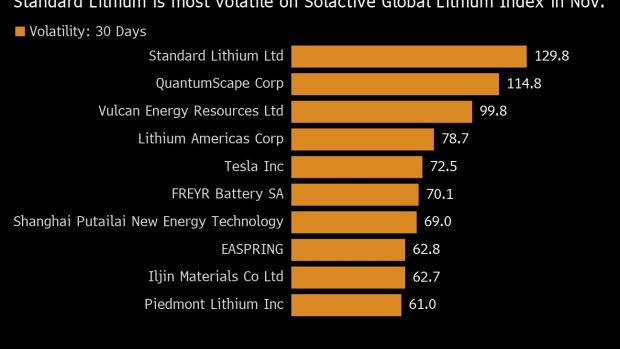 Lithium ore falls from a chute onto a stockpile at the Bald Hill lithium mine site, co-owned by Tawana Resources Ltd. and Alliance Mineral Assets Ltd., outside of Widgiemooltha, Australia. , Photographer: Carla Gottgens/Bloomberg

(Bloomberg) -- The global lithium boom has seen some dizzying moves among producers of the rechargeable battery component. None more so than a Canadian junior piloting a new technique in Arkansas that’s attracted the attention of a short seller.

In the 12 months through Oct. 27, Standard Lithium Ltd. soared more than 600% on the back of surging electric vehicle demand and the promise of a patented method of removing the metal from brine used in a bromine facility owned by Germany’s Lanxess AG. But from that late-October peak, the shares slumped as much as 34% before recovering much of the ground.

The roller-coaster ride has made Standard the most volatile member of the Solactive lithium index in the past 30 days, with a reading that’s more than double the peer average. Underpinning the swings is a public tussle between the Vancouver-based company and Blue Orca Capital. In support of its short position, the activist investment firm voiced doubts about the viability of Standard’s direct lithium extraction (DLE) technology.

With the transition to clean energy set to triple lithium demand over the coming years, the industry is racing to develop cleaner and easier production techniques. If it succeeds, Standard would be the first to produce commercially using DLE, which avoids the evaporation process of conventional brine production.

In response to Blue Orca’s concerns over the project’s scalability, Standard said its report contained “numerous important inaccuracies and misunderstandings.” Blue Orca countered that data used in its report -- which was self-reported by Standard to Arkansas Oil & Gas Commission -- showed recovery rates at the demonstration plant at a fraction of the 90% the company said its technology would allow for.

Five days after its initial response to Blue Orca’s short call, Standard announced it will receive a $100 million investment from a unit of Koch Investment Group in a validation of its technology. That saw shares jump as much as 23% on Nov. 24.

On Friday, Standard said it filed a preliminary economic assessment report for its project in southwest Arkansas, which was prepared by six independent consulting firms. The key points were the same as those in a Oct. 12 release.

As the dust settles on a whipsawing month, Standard shares were down about 6%, while the index was up about 2%.

“Standard Lithium is in a transformative phase,” the company said by email Tuesday. “Collectively, we are focused on building the first new commercial lithium plant in North America in six decades.”