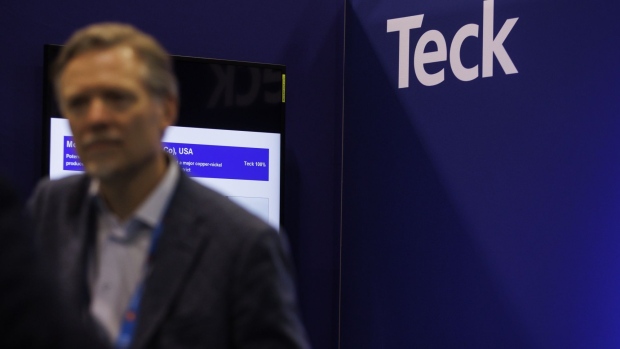 A Teck Resources Ltd. booth at the Prospectors & Developers Association of Canada (PDAC) conference in Toronto, Ontario, Canada, on Tuesday, June 14, 2022. As China lockdowns rekindle concerns over metals demand, mining leaders on the other side of the world shed masks and rubbed shoulders at one of the industry's biggest annual gatherings. Photographer: Cole Burston/Bloomberg , Bloomberg

(Bloomberg) -- Teck Resources Ltd. fell the most in four months after taking a C$950 million ($703 million) charge for selling its stake in a Canadian oil sands project to Suncor Energy Inc.

Shares fell as much as 7.9% Thursday in Toronto, its biggest intraday decline since June 23, after disclosing third-quarter financial results and following Wednesday’s announcement that it is selling its interest in the Fort Hills project to Suncor for about C$1 billion. The stock traded 3.4% lower at C$46.81 at 11:08 a.m. in Toronto.

The sale signals an end to Teck’s oil-and-gas production efforts as the company shifts away from fossil fuels and narrows its focus to industrial metals. The sale of its 21% stake in Fort Hills triggered a non-cash impairment charge that was recorded in its third quarter.

“This transaction advances our strategy of pursuing industry-leading copper growth and rebalancing our portfolio of high-quality assets to low carbon metals,” Chief Executive Officer Jonathan Price said in Wednesday’s statement. The transaction is expected to close in the first quarter of next year. After the sale, Suncor will hold 75.4% of Fort Hills, with a unit of TotalEnergies SE holding the rest.

The Vancouver-based miner has indicated that it wants to focus more on its metals business, including copper and zinc, rather than its energy and coal assets. Fort Hills only began producing oil in 2018 and it has struggled amid market volatility and production disruptions.

Teck also said it is scaling back this year’s production target for steelmaking coal following an equipment failure at its Elkview operation in British Columbia, Canada, according to a separate earnings statement released Thursday. The mishap will cut coal production by about 1.5 million metric tons for the year, the company said.