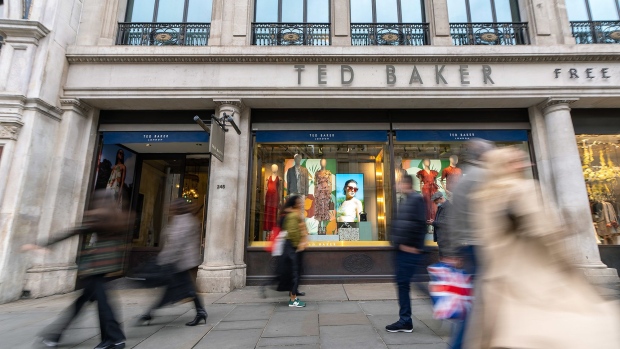 Authentic Brands Group Inc., the owner of Juicy Couture, has struck a deal to buy Ted Baker Plc for about £211 million ($254 million) in a cut-price cash deal which could secure the future of the struggling UK fashion chain.

The US group offered 110 pence a share for the chain, best known for its floral designs, according to a statement Tuesday. The deal represents a premium of about 18% to the retailer’s closing price on Monday.

Ted Baker stock was up more than 16% at 9:12 a.m. in London. The company’s directors are unanimously recommending the deal.

New York-based Authentic Brands previously held discussions with Ted Baker and indicated it was willing to pay a higher price but then walked away. Private equity fund Sycamore Partners Management LP also bowed out of the sale process after offering as much as 137.5 pence a share.

Founded by Jamie Salter, Authentic Brands has become a key consolidator in the retail industry and is the owner of licensing and marketing rights to names like David Beckham and Juicy Couture. It agreed to buy Reebok from Adidas AG in August of last year for $2.5 billion.

Authentic Brands said Ted Baker is “a distinctive British lifestyle brand” and one option it’s exploring is to merge the UK retailer’s operations in North America with SPARC Group LLC, its joint venture with Simon Property Group which operates about 1,660 stores.

The lower price agreed comes amid tough market conditions for British retailers and as Ted Baker’s turnaround struggles to regain momentum. The chain was engulfed in a scandal in 2019 when founder Ray Kelvin departed after being accused of inappropriate hugs and other behavior in the workplace. Kelvin denied any wrongdoing. Led by Chief Executive Officer Rachel Osborne, Ted Baker shares have lost more than 90% of their value in the past four years.

“As hard as leaving Ted has been, to this day I feel the same passion for design and product to do it all again,” Kelvin said in a separate statement Tuesday. “I am unsure if Ted Baker is still the company I once knew, however I hope under new ownership it will regain its identity.”

Ted Baker has grown to 377 stores and concessions worldwide since Kelvin started the business as a men’s shirt shop in Glasgow in 1988. The company offers its own-design mens and womenswear and accessories and is also known for its mens barbers under the name Ted’s Grooming Room.

Ted Baker is being sold via a UK arrangement that requires 75% approval from shareholders. It’s expected to be completed during the fourth quarter.

(Updates with founder comments in eighth paragraph, number of stores in final graph.)