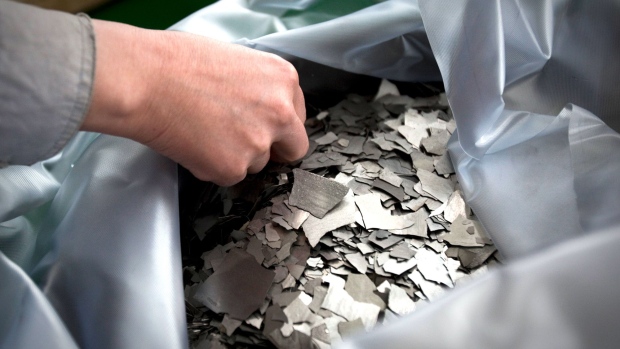 Neodymium is displayed at the Inner Mongolia Baotou Steel Rare-Earth Hi-Tech Co. factory in Baotou, Inner Mongolia, China, on Wednesday, May 5, 2010. A generation after Chinese leader Deng Xiaoping made mastering neodymium and 16 other elements known as rare-earths a priority, China has cornered the market, with far-reaching effects ranging from job losses and global trade to U.S. national security. Photographer: Bloomberg/Bloomberg , Photographer: Bloomberg/Bloomberg

(Bloomberg) -- Senator Ted Cruz said he plans to introduce legislation on Tuesday that aims to end U.S. reliance on China for rare earth elements used in the manufacturing of products including consumer electronics, electric vehicles and fighter planes.

The bill is part of a push in Congress to shift supply chains, particularly in industries critical for national defense, away from China and back toward the U.S.

“Much like the Chinese Communist Party has threatened to cut off the U.S. from life-saving medicines made in China, the Chinese Communist Party could also cut off our access to these materials, significantly threatening U.S. national security,” Cruz, a Texas Republican, said in a statement. “The Ore Act will help ensure China never has that opportunity by establishing a rare earth elements and critical minerals supply chain in the U.S.”

The bill would create tax incentives for companies to buy rare earth elements within the U.S. It would also require the Defense Department to do so, and would provide money for pilot programs to expand the American rare earths industry.

The legislation is among a number of proposals to strike back at China -- whom many Republicans, including President Donald Trump, fault for not acting sooner to prevent the spread of the coronavirus. which led to more than 280,000 deaths worldwide and more than 80,000 in the U.S.

Cruz and other Republicans have already introduced measures to reduce U.S. dependency on China for drugs and other medical equipment. They have also sponsored legislation to let U.S. citizens sue China over harm caused by the virus and have called for banning live wildlife markets where the virus may have originated.

China provided 71% of the global rare earth elements produced in 2018 and was the top supplier to the U.S. that year, according to the Congressional Research Service. Some members of Congress have been pushing for years for the U.S. to reduce its reliance on China for the elements, particularly after trade restrictions in 2010 that sent prices spiking around the world.

The U.S. was once a major producer of rare earth elements -- which are relatively abundant but difficult to extract -- until China became a major low-cost producer in the mid-1980s, according to the CRS. Cruz and others in Congress have argued that Chinese state subsidies allowed that industry to flourish, killing off American competition.

The bill is called the Onshoring Rare Earths Act.