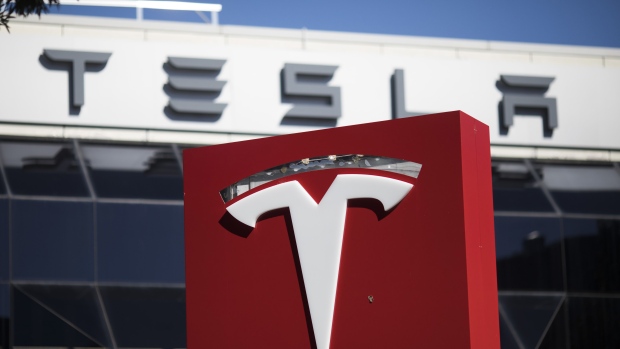 Signage outside a Tesla Inc. service center in Sydney, Australia, on Monday, April 12, 2021. Tesla and the electric-car industry generally thrive in the world’s richest nations. Not so in Australia, where even tractors outsell EVs two to one. Photographer: Brent Lewin/Bloomberg , Bloomberg

(Bloomberg) -- The 19-year-old cybersecurity researcher who remotely accessed dozens of Tesla Inc. vehicles through a third-party flaw, has a new trick: hacking the car owners’ email addresses to notify them they’re at risk.

Earlier this month, David Colombo discovered a flaw in a piece of third-party open source software that let him remotely hijack some functions on about two dozen Teslas, including opening and closing the doors or honking the horn. In trying to notify the affected car owners, he then found a flaw in Tesla’s software for the digital car key that allowed him to learn their email addresses.

Colombo said the defect was in a Tesla application programming interface, or API. After he publicized his first discovery, a Twitter user suggested contact details for the affected owners could be found in the code that allows two pieces of software to communicate with each other, also known as an API endpoint.

“Once I was able to figure out the endpoint, I was indeed able to carry the email address associated with the Tesla API key, the digital car key,” Colombo said in an interview Monday with Bloomberg Television. “You shouldn’t be able to carry sensitive information like an email address using an access that is already expired or revoked.”

The teenager, from Dinkelsbühl, Germany, said he has shared the additional vulnerability with Tesla, and the car company’s engineers have written a fix to prevent it from happening in the future.

Tesla didn’t respond to a request for comment. Colombo said his additional discovery should be eligible for a “bug bounty” from Tesla -- consistent with the company’s policy -- but officials there haven’t confirmed an amount with him. He joked that he hopes the sum is big enough to cover the coffee bill he’s amassed working on the original flaw the last two weeks.