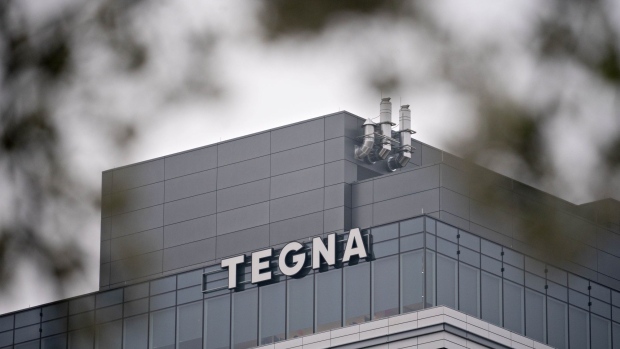 Signage is displayed outside Tegna Inc. headquarters in McLean, Virginia, U.S., on Friday, March, 13, 2020. Comedian and TV producer Byron Allen has made a $20-a-share, all-cash offer for Tegna in a deal that values the TV station owner at $8.5 billion, including debt, according to a person familiar with the situation. Photographer: Andrew Harrer/Bloomberg , Bloomberg

(Bloomberg) -- Tegna Inc. said it had received takeover offers after a report that private equity giant Apollo Global Management Inc. and one of the broadcaster’s largest shareholders had made a bid to buy the company.

“Consistent with its fiduciary duty to Tegna shareholders, the board will carefully review and evaluate these proposals,” Tegna said Tuesday. Tegna shares rose 6.1% to $20.70 at 12:42 p.m. in New York trading and have risen about 48% this year.

On Monday, the New York Post reported that Apollo had joined with Standard General LP to make a bid for Tegna that was valued at more than $8 billion. Standard General is Tegna’s fourth-largest shareholder, owning a 4.8% stake. It has pushed for change at the broadcaster, arguing that current leadership oversaw a series of missteps, including failing to find a buyer.

Talks with at least four potential bidders, including Apollo, fell apart last year. Tegna rejected the investments firm’s board nominees and has maintained it was on the right path. It separated from Gannett Co. Inc., the local newspaper giant, in 2015.

Apollo has been amassing a local-TV empire, having bought more than a dozen stations from Cox Media Group in 2019.