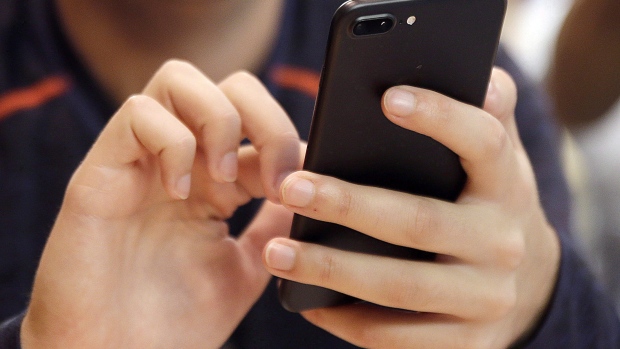 A young person uses a smart phone. The Canadian Press/AP

TORONTO -- TekSavvy Solutions Inc. is appealing to Canadian consumers for support in a politically charged battle between Canada's independent internet service providers and the big phone and cable companies.

Bell, Rogers and Canada's other major phone and cable companies asked the federal cabinet in November to overrule a 2019 regulatory decision that slashes how much they can charge independent ISPs like TekSavvy.

The industry giants argued the Canadian Radio-television and Telecommunications Commission overstepped its authority in August by cutting wholesale capacity rates by up to 43 per cent and chopping access rates up to 77 per cent.

Canada's small and mid-sized ISPs collectively serve about one million households using infrastructure they either own or rent.

TekSavvy vice-president Janet Lo said Monday that the Chatham-based company -- Canada's largest independent ISP -- has launched a campaign to urge the public and politicians to support the CRTC.

The campaign will include billboards, transit ads, radio advertising and social media, she added.

An ad included in a TekSavvy press release asks, "Tired of being gouged?", and urges consumers to "speak up."

"We're just trying to raise general awareness, to make sure all Canadians know that they can have their voices heard and talk to their MPs if this issue is important to them," Lo said in an interview from Ottawa.

The cabinet has set Feb. 14 as the deadline for receiving comments on the issue but, as of Monday, no submissions had been made to the government website where they'll be posted for the public

TekSavvy says it has set up the website Paylesstoconnect.ca to make it easier for consumers to forward their comments to individual members of Parliament.

Among other things, one of the key issues in dispute is whether the CRTC or the carriers themselves are the most qualified to calculate how much it costs the big providers to provide wholesale infrastructure.

The big carriers argue that the CRTC's review process -- which took more than three years to complete -- was seriously flawed and will undermine confidence required for them to risk billions of dollars to build high-quality networks.

A joint submission on behalf of cable companies said, for instance, that the CRTC's wholesale rates applicable to Rogers will cover the costs of connecting only about 250 node segments -- even though there were 11,500 node segments being used in 2016 when the interim rates were set and thousands more today.

"That number continues to grow, given that ... nodes have to be added to maintain quality of service as internet usage increases; and ... annual usage in Canada has increased dramatically in recent years, with no end in sight," the cable companies' submission says.

TekSavvy argues that the big carriers are attempting to use the CRTC, courts and cabinet to "game the system with impunity" by using inflated wholesale costs that cripple their smaller rivals.

Lo said that the CRTC's 2019 decision includes an 11-page summary of reasons for the regulator's adjustments of the costing methodologies proposed by the telecom companies and alleged that they are "simply trying to inflate the wholesale rates, and therefore the retail rates that all Canadians pay for internet services."