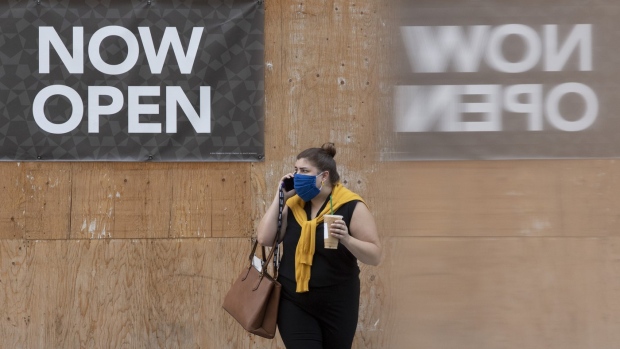 A woman speaks on the phone on a sidewalk in downtown Ottawa, Friday, July 24, 2020. , THE CANADIAN PRESS/Adrian Wyld

Complaints from Canadian telecom and TV customers decreased 26 per cent between Aug. 1, 2021 and Jan. 31, 2022 compared with ­­­the same period a year before, says a new report from the Commission for Complaints for Telecom-television Services (CCTS).

The agency, which was created to deal with and resolve telecom-related complaints, said Monday that there were 6,682 new complaints.

The CCTS report found that a lack of disclosure remains the top issue across services and platforms. There were 2,070 disclosure complaints filed over the six months, with 'contract conflicts with agreement' leading the way.

"We continue to observe problems with service providers failing to disclose important information to their customers when signing up for a new phone, internet or TV service," said CCTS commissioner and CEO Howard Maker in a news release.

The second-largest number of complaints was around billing, with 2,061 incorrect-charge complaints filed, according to the report.

The report also found that wireless users raised the most issues overall, followed by internet, TV and landline phone customers. Nearly half of the complaints came from wireless users.

While Bell had the most customer complaints at 1,182, accounting for 17.7 per cent of total complaints, the number of issues filed dropped by 36.1 per cent for the telecom giant. Complaints about Rogers went down 16.5 per cent to 1,003, while Telus complaints decreased almost 17 per cent to 535. Fido, owned by Rogers, had 753 complaints, while Bell's Virgin Mobile and Virgin Plus had 511. In addition, Koodo owned by Telus, had 383 complaints. Shaw Communications had 327 complaints, while Freedom Mobile, which it owns, had 434.

The CCTS report covered 422 service providers and brands, including 14 that participated for the first time.

Nearly nine out of 10 of the complaints were resolved, typically within 30 days, according to the report.

"If a customer complains to us that there's a problem with their bill, for example, and we look at it and we determine that they're correct, we make sure it gets fixed," Maker said in an interview.

This latest report comes as the waiting game continues for full approval of the Rogers-Shaw deal — the Competition Bureau and Innovation, Science and Economic Development Canada still need to have their say. In March, the Canadian Radio-television and Telecommunications Commission (CRTC) approved Rogers' acquisition of Shaw's broadcasting services with some conditions.

Maker said he couldn't say if complaint numbers would affect regulatory approval of the deal.

"But the expectation is that participation in CCTS will continue, so consumers will have the full protection of the industry ombudsman service."

The CCTS didn't receive any complaints about 270 of the participating service providers.