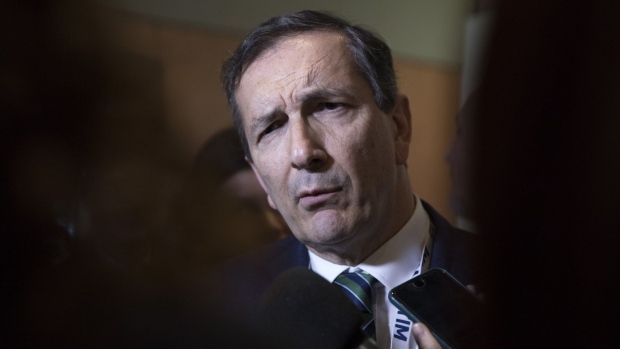 (Bloomberg) -- Telecom Italia SpA Chief Executive Officer Luigi Gubitosi is set to resign as early as today, according to people familiar with the discussions, less than a week after private-equity firm KKR & Co. made a preliminary 10.8 billion-euro ($12.2 billion) offer for the former Italian monopoly.

The company’s directors, who are meeting on Friday, will likely accept the CEO’s offer to depart, said the people, who asked not to be identified because the discussions aren’t public. Gubitosi was already under pressure following a surprise profit warning last month that led to a rift with Vivendi SE, Telecom Italia’s largest shareholder, people familiar with the situation said previously.

Chairman Salvatore Rossi could assume the CEO role on an interim basis, with the company’s head of Brazil, Pietro Labriola, possibly promoted to the position of group general manager, the people said.

For Telecom Italia, Gubitosi’s departure would mark the fourth overhaul of top management in less than six years. The company was approached on Nov. 21 by KKR about a bid, which Vivendi has turned down as too low.

Telecom Italia operates in one of the world’s most competitive telecommunications markets, with cut-throat prices that have eroded the former state-owned monopoly’s profit margins.

Gubitosi’s efforts to boost premium services have failed to reverse the decline, with Vivendi increasing the pressure on the beleaguered CEO following repeat profit revisions.