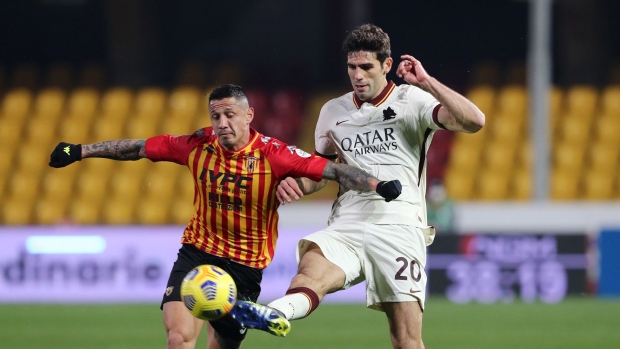 BENEVENTO, ITALY - FEBRUARY 21: Federico Fazio of A.S Roma battles for possession with Gianluca Lapadula of Benevento Calcio during the Serie A match between Benevento Calcio and AS Roma at Stadio Ciro Vigorito on February 21, 2021 in Benevento, Italy. Sporting stadiums around Italy remain under strict restrictions due to the Coronavirus Pandemic as Government social distancing laws prohibit fans inside venues resulting in games being played behind closed doors. (Photo by Francesco Pecoraro/Getty Images) , Photographer: Francesco Pecoraro/Getty Images Europe

(Bloomberg) -- Telecom Italia SpA, Italy’s largest phone carrier, is ready to back DAZN Group Ltd. in its multi-billion-euro offer for broadcast rights to the country’s top soccer league, according to people familiar with the matter and to a confidential letter seen by Bloomberg.

The former telephone monopoly last month reached an agreement with DAZN -- subject to conditions -- on a possible plan that would provide distribution and technological support as well as financing of about 1 billion euros ($1.2 billion) for its bid to broadcast the next three seasons of Italy’s Serie A league, the people said, asking not to be named since the deliberations aren’t public.

DAZN, a streaming startup backed by billionaire Len Blavatnik, has offered Serie A 840 million euros per season and Telecom Italia could back that bid by 40%, providing about 340 million euros per year in a content distribution deal, the people said. DAZN is bidding against Comcast Corp.’s Sky.

The streaming company’s business plan “includes an important distribution agreement with a partner who’s an industry leader and will provide further support also from a financial point of view,” DAZN wrote in a confidential letter sent to Serie A on Feb. 8. The message aimed to address concerns raised by some soccer team presidents over DAZN’s strength.

Though the letter doesn’t explicitly mention Telecom Italia, the carrier is the “main distribution partner” cited in the document, people familiar with the matter said.

The DAZN letter says that the company’s partner “is committed to the payment of an annual guaranteed minimum equal to more than 40% of the annual total amount due to Serie A.”

DAZN also says in the letter that its partner’s payments will be sent through six annual installments of the same amount “made to an escrow bank account to be used exclusively for payments to Serie A.”

For DAZN, a tie-up with a partner with funding capacity could be a game-changer. The streaming company lost nearly $2 billion last year and has been in retreat in the US and Latin America. Prioritizing Italy, Germany and Japan could allow it to grow in markets with less competition.

“DAZN is hanging on to Germany and Italy as key markets and in both it is trying to carve out a competitive position,” said Claire Enders, founder of media consultant Enders Analysis.

No final decision has been made on the plan and Telecom Italia could still withdraw its support, the people said. Representatives for Telecom Italia, DAZN and Serie A all declined to comment.

A Telecom Italia move into soccer would boost live streaming services in a country that’s still mostly characterized by conventional media such as digital terrestrial television, over-the-air broadcasting dominated by Silvio Berlusconi’s Mediaset SpA, and satellite programming, which was pioneered in the country by Sky.

Serie A has been seeking new sources of revenue. An effort earlier this month to sell a $2 billion stake to an investor group stalled after the league’s board failed to act on the deal, people familiar with the matter said at that time, raising concerns that the agreement could ultimately collapse.

The Italian league, which features players such as Cristiano Ronaldo and Zlatan Ibrahimovic, is in need of a cash injection after decades of underinvestment. Finances have been further pummeled by the pandemic, as matches have been played to empty or near-empty stadiums and broadcast revenue has declined.